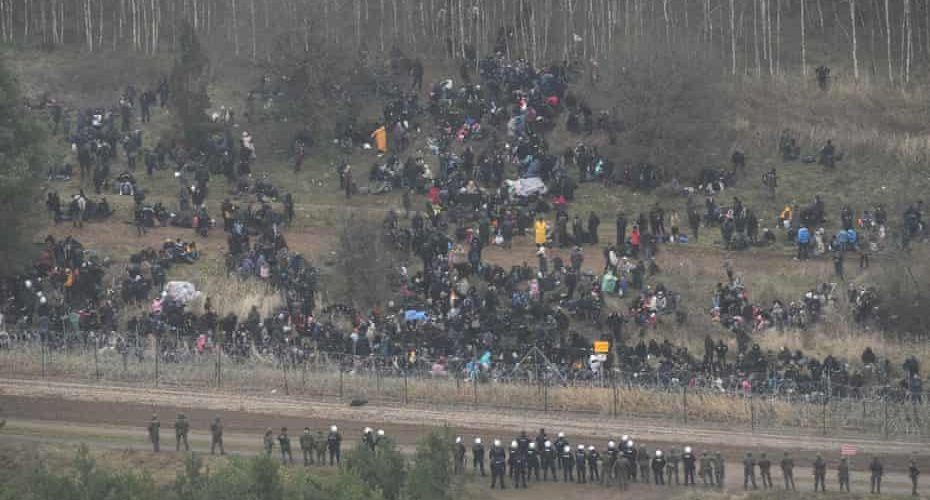 Morawiecki: ‘Security and Integrity of Our Frontiers are Being Brutally Attacked’

Over the past week the situation on Poland’s eastern border with Belarus has continued to worsen with daily attempted migrant crossings into the EU. Poland, the EU and U.S. have also pointed the finger of blame for the crisis at the door of the Russian-backed Alexander Lukashenko regime in Belarus.

Over the past week the ongoing migrant crisis on Poland’s eastern border with Belarus reached a whole new level of intensity and has propelled the tragic situation there into headlines across the world. There have been daily attempts by large groups of migrants living in camps on the Belarusian side of the border to cross into Poland to claim asylum. Polish authorities have detaining scores of migrants and prevented the entry of many hundreds more. The Polish government has responded to the sustained pressure on the eastern border by increasing the number of troops stationed there to 15,000. It has also once again emphasised that the humanitarian crisis is being deliberately instigated by Belarus.

On Tuesday Poland closed the border crossing with Belarus at Kuźnica due to multiple attempted illegal crossings. Legitimate travellers were forced to use one of two other official crossing points. The Polish Border Guard had announced the previous day that all road traffic in both directions would be suspended indefinitely, while rail connections would continue to operate. Prime Minister Mateusz Morawiecki addressed a special session of the Sejm on Tuesday and warned that Poland was facing what he termed the biggest ‘blast from the East’ and the most serious threat to its security in three decades. He said that ‘It’s the first time in 30 years where the security and integrity of our frontiers are being so brutally attacked and tested’.

Poland has received strong support from the European Union institutions, as well as from individual member states, for its tough stance against allowing the migrants to enter, which it has emphasised is also in defence of the eastern frontier of the union. The President of the European Council, Charles Michel, not normally seen as a particular friend of the Polish government, flew to Warszawa on Wednesday and held a joint press conference with Prime Minister Mateusz Morawiecki.

Poland’s stance in refusing to allow the migrants to apply for asylum has faced criticism from migrant welfare organisations who argue the stance is illegal under international law. The government has pointed out that the migrant influx is far from spontaneous and is in fact deliberately instigated by, and under the control of, the Belarusian government.

Call for Further Sanctions Against Belarus

Poland has called for the EU to impose further sanctions on Belarus and on individual members of the Lukashenko regime, something which it’s set to do. The government also wants airlines involved in ferrying migrants from the Middle East to Belarus, in advance of being moved to the border with the European Union, to be banned from European airspace.

The United States has also voiced support for Poland and sharply criticised the activities of the Lukashenko regime in Belarus. The U.S. expressed concern over what it termed ‘disturbing images and reports’ about the situation on the border and condemned Belarus for ‘orchestrating’ migrant flows into Europe. A State Department spokesperson said that ‘The United States will continue to stand by Poland, and all of our partners in Europe, who have been threatened by Belarus’s unacceptable actions’.

Russian has maintained its strong backing for the Lukashenko regime. The Kremlin urged the European Union to engage in direct talks with Belarus and accused it of trying to ‘strangle’ the country with plans to close off part of its border. On Wednesday it was reported that two Russian long-range bombers flew over Belarus in a demonstration of support.

A Russian government spokesman told a press briefing that ‘It is apparent that a humanitarian catastrophe is looming against the background of Europeans’ reluctance to demonstrate commitment to their European values’. He described as ‘absolutely irresponsible and unacceptable’ a comment on Tuesday by Prime Minister Morawiecki that the crisis ‘has its mastermind in Moscow’. He claimed that the EU, whose external frontier Poland says it’s protecting, had previously allowed-in similar groups of migrants and that ‘This is nothing other than further attempts to actually strangle Belarus’.

Last week’s death in hospital of a 30-year-old woman with pregnancy complications in the southern town of Pszczyna has once again reignited controversy over Poland’s abortion law. Her family claimed that she’d been left too long waiting for an abortion.

Pro-choice groups maintain that last years’ tightening of the abortion regime in Poland arising from a Constitutional Tribunal ruling, has led doctors to be more reluctant to perform an abortion even in circumstances where the mother’s life is in danger. Supporters of the near total ban on abortion point out that terminations where the life of the mother is at risk are explicitly permitted, and that the case of the deceased lady, known only as Izabela, may be entirely unrelated to the question of abortion. Two doctors who were on duty in the Pszczyna hospital at the time of the woman’s death have been suspended. Prosecutors and government officials are conducting an investigation into the woman’s death.

Demonstrations in support of a relaxation of the abortion law were held in many Polish towns and cities on Saturday. The demonstrators carried banners with the slogan ‘Ani jednej więcej’ or ‘Not one more’ in English. Prime Minister Morawiecki expressed his ‘deepest sympathy’ with the family of the deceased woman. He told reporters that ‘when the mother’s life or health is in danger, termination of the pregnancy is still possible’ and that last year’s Constitutional Tribunal ruling ‘changed nothing in that regard’.

The Polish central bank, Narodowy Bank Polski, has slightly trimmed, by just 0.1%, it’s estimates for Polish GDP growth this year and next. In its latest forecast the bank said it expects growth of 5.3% this year followed by growth of 4.9% in 2022. It also forecast a 4.9% growth rate for 2023. The bank last week raised the key reference interest rate in response to a surge in inflation.

According to the latest estimate by the Ministry of Family, Labour and Social Policy, the unemployment rate in Poland dropped by 0.1 per cent in October to 5.5% compared to the previous month. It estimated there were 912,300 people without work at the end of October, a reduction of 22,400 on September.

On Tuesday the Galeria Kordegarda in Warszawa put on display for the first time in Poland a rare replica of a German Enigma cipher machine created by Polish intelligence before the Second World War. It’s part of an exhibition entitled ‘Enigma: Mystery Solved’. Narodowe Centrum Kultury or National Centre for Culture in English, which is organising the exhibition, commented on its website that ‘Cracking the code of the German encryption machine Enigma was one of the greatest achievements of Polish cryptologists and the Polish intelligence service, which contributed to the defeat of Germany during World War II’. It added that ‘Cracking the Enigma code as early as December 1932 was not only a great success of the Polish Cipher Bureau and cryptologists working in it, but also of Polish science’ The exhibition runs until November 28th.

Poland’s Hubert Hurkacz continues to climb the men’s tennis ATP rankings. He’s moved up one place in the latest rankings to another career best of world number 9. The 24-year-old Pole last week reached the semi-finals of the Rolex Paris Masters tennis tournament before being knocked out by world number one Novak Djokovic.

The Polish Ambassador to Ireland, Anna Sochańska, whom of course we spoke with on this program a few weeks ago, has received an unusual United Nations award. On Monday the Embassy in Dublin said that she had been awarded The 2021 World Bicycle Day of the United Nations Award for promoting ‘Bicycle Diplomacy’ and for innovative and enthusiastic engagement in the promotion of cycling. The embassy social media post showed the ambassador with her commemorative plaque and of course bicycle. The embassy went on to say that ‘We are truly honoured and wish to truly thank Professor Leszek Jan Sibilski for this award and his efforts to promote cycling as a sustainable means of transport’.