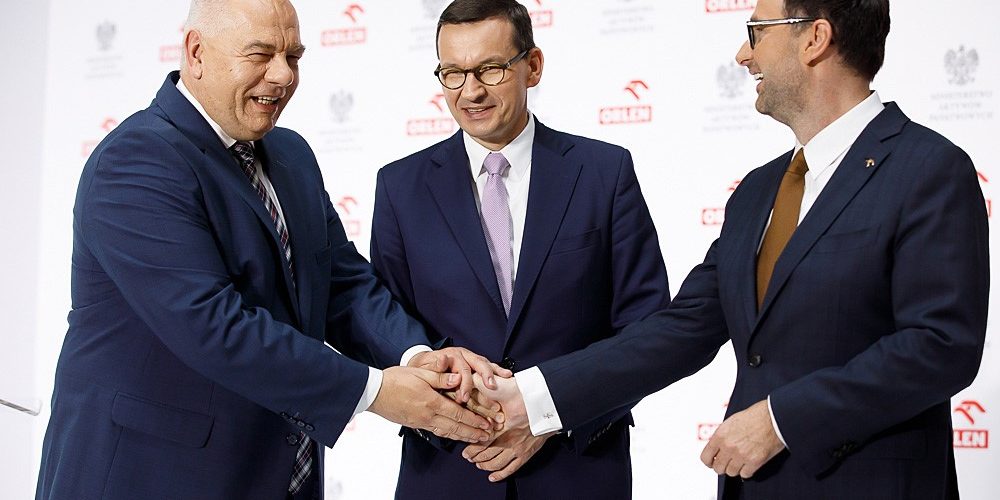 On Wednesday, the Polish government moved to speed-up the timetable for easing Covid-19 restrictions, having previously imposed some of the most pernicious measures in Europe, while at the same time continuing to push its vaccination agenda with jabs now to be offered to 16 and 17- year-olds. Deputy Prime Minister, Jacek Sasin, announced a further expansion in the role of PKN Orlen, headed by Prawo i Sprawiedliwość favourite, Daniel Obajtek, in the country’s energy sector, and there’s increasing concern within the ranks of Platforma Obywatelska that Rafał Trzaskowski is planning a political future independent of the embattled opposition party.

• President Duda co-hosts an online summit of leaders of nations on NATO’s eastern flank, and

• The funeral service of actor turned politician Bronisław Cieślak is held in Kraków.

As the government had previously indicated it would if Covid-19 case numbers continued to fall, on Wednesday Prime Minister Mateusz Morawiecki announced an acceleration in the timetable for lifting some Covid-19 related restrictions. Case numbers are currently running at their lowest level since last October. Among the changes to the plan is that cinemas and theatres can reopen up to 50% capacity from May 21st, eight days earlier than originally planned and the requirement with exceptions to wear a face covering in outdoor public places is being lifted from Saturday.

However, on Tuesday Health Minister Adam Niedzielski said that people travelling to Poland from Brazil, India and South Africa will have to undergo a period of quarantine, even if they have a clear Covid-19 test. Niedzielski said that ‘in Poland we have at least 16 cases of the Indian variant’. As of Wednesday, 14.27m people had been vaccinated of which 10.61m have received one dose and 3.84m are fully vaccinated. Vaccination is also to be extended to 16 and 17-year-olds.

Following last week’s approval by the Sejm of a measure necessary to facilitate the release of additional funding for Poland from the EU’s Covid-19 recovery fund, the government has started to outline how it’s planning to spend the money. On Wednesday Deputy Health Minister Sławomir Gadomski told the Sejm that more than 30 billion złotych will be allocated to improvements in health care over the next six years, an amount he said would be two and a half times that allocated from the last EU multi-annual budget. He said the money would be used for purposes including the modernisation of medical universities.

There are reports of increasing concern within the ranks of the main opposition party, Platforma Obywatelska, that their party Vice President, Mayor of Warszawa and 2020 presidential candidate, Rafał Trzaskowski, is planning a political career outside the party. It follows the sharp decline in support for Platforma Obywatelska in the face of the rise of Polska 2050. Traszkowski has announced an extensive tour of Polish regions and well as other political events under the banner of the Wspólna Polska political movement he already heads. Trzaskowski is continued to pledge his loyalty to Platforma Obywatelska, but the increasingly independent branding of his image has led to concerns within the centrist party that he’s preparing to break away. The concerns were reportedly discussed at a meeting of the party’s top leadership, including Trzaskowski, on Tuesday. The position of PO’s current leader, Boris Budka, has been under increasing pressure in the face of the party’s slide in the polls.

On Tuesday, the Supreme Court and other prominent government buildings including the Supreme Audit Office and the National Council of the Judiciary in Warszawa were evacuated following receipt of a bomb threat. The Supreme Court said that ‘As a result of information obtained by e-mail that an explosive had been placed in the Supreme Court building, the First President of the Supreme Court ordered the evacuation of the building’. Nothing suspicious was found in any of the locations.

On Wednesday Deputy Prime Minister and Minister of State Assets, Jacek Sasin, announced a major restructure in Poland’s energy sector. The state’s ownership share in oil giant PKN Orlen will increase from 27.52% to 50% as part of a series of mergers designed to create a Polish energy conglomerate. As part of the plan, PKN Orlen will take over the already state-owned gas firm PGNiG and the fuel company Lotos. The merger will create the largest multi-energy provider in Central and Eastern Europe. Sasin claimed that the move would assist with Poland’s economic recovery saying ‘This merger will be good for Poland and our future. Our economy must be stronger and more innovative so that it can meet the challenges that lie ahead’.

On Monday President Andrzej Duda co-hosted, along with Romanian President Klaus Iohannis, a virtual summit meeting of the leaders of nine countries on the eastern flank of NATO. The mutual defence organisation’s Secretary General, Jens Stoltenberg, took part in the meeting of the so-called Bucharest Nine, which was a joint Polish-Romanian initiative in 2015 designed to help align positions between the countries on security issues of mutual concern. The meeting was also addressed by U.S. President Joe Biden, with a White House statement saying he ‘underscored his commitment to rebuilding alliances and strengthening Transatlantic relations’. Commenting before the event the head of the Biura Bezpieczeństwa Narodowego (BBN) or National Security Bureau, Paweł Soloch, commented that that meeting provided an opportunity to agree a common position ahead of the NATO summit scheduled for June 14th.

The meeting comes against the backdrop of the recent flare-up in tension between Russia and Ukraine, and of course the ongoing political crisis in Belarus following the disputed presidential election there in August last year. Duda had earlier held talks with this Romanian counterpart and on Tuesday met with soldiers taking part in NATO military exercises in eastern Romania.

On Monday, the European Union’s High Representative for Foreign Affairs and Security Policy, Josep Borrell, said the bloc is preparing a new round of sanctions against the Belarusian authorities. He said that the Lukashenko regime is continuing to intimidate its own citizens and has now also targeted the Polish minority in the country. He told reporters he expected the new round of sanctions to be adopted in the coming weeks.

In the face of the worst violence in the region since 2019, on Monday Poland’s Ministry of Foreign Affairs said that ‘Poland calls upon all sides in Israel and Palestine to put an end to violence and prevent further loss of life. We condemn all the actions that led to many civilian casualties. Crisis must be resolved through dialogue, with respect for human rights’. The fighting follows a series of rocket attacks on Jerusalem and other targets in Israel.

On Monday, a secular funeral service for the actor-turned-politician, Bronisław Cieślak, took place in Kraków. He died of cancer earlier this month at the age of 77. During the ceremony Cieślak was posthumously awarded the Knight’s Cross of the Order of Polonia Restituta, following a decision by President Andrzej Duda. It was presented by presidential aide Andrzej Dera. Cieślak had been a member of the Polish United Workers’ Party from 1971 to 1990 and served as a Democratic Left Alliance Sejm member from 1997 to 2005 when he lost his parliamentary seat. Cieślak was best known as an actor, especially for playing the part of Lt. Sławomir Borewicz in the hit 1970s and 1980s television series 07 zgłos się (07, come in).

Wednesday marked the 51st anniversary of the death of legendary Polish Second World War military commander, General Władysław Anders, who famously led tens of thousands of Polish soldiers and civilians out of the South Union into Iran. He subsequently commanded the Second Polish Corps during the Italian campaign before living in exile in Britain after the war, even been stripped of his Polish citizenship by the Communist regime.

The Chancellery of Prime Minister Mateusz Morawiecki tweeted ‘On this day in 1970 Polish Army general Władysław Anders passed away, a top commander who essentially influenced the course of the Polish military operations during World War Two. His most spectacular success was a victory in the battle of Monte Cassino, Italy’.