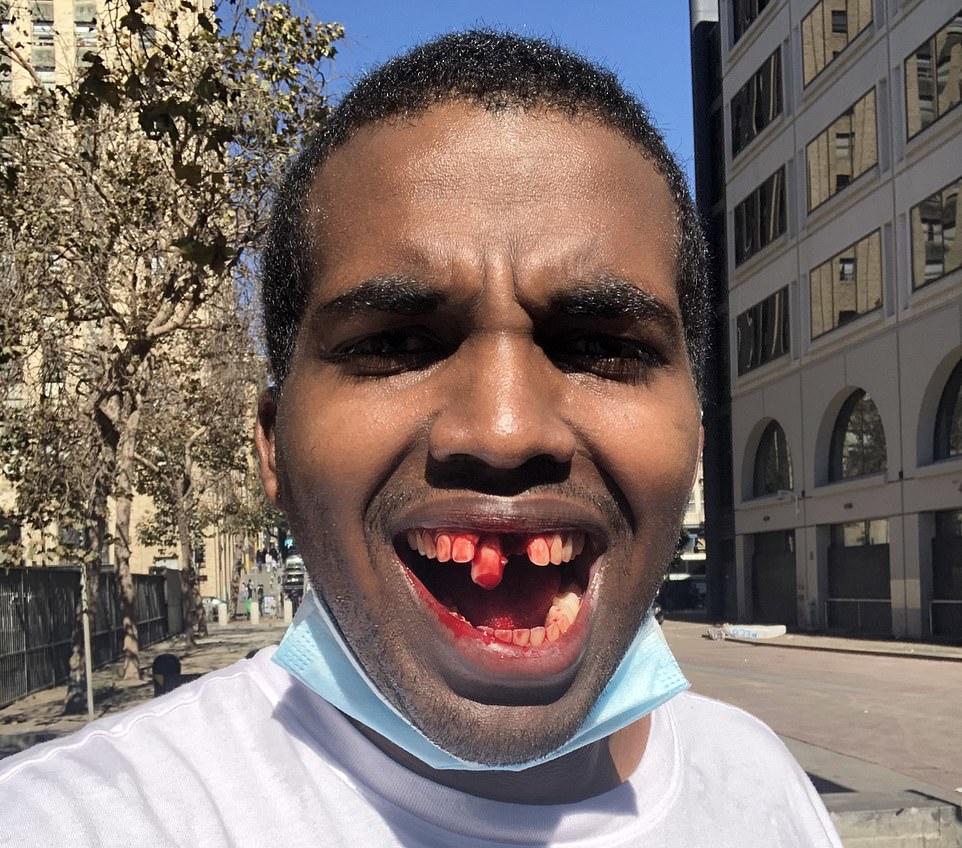 Conservatives attending the Saturday Rally Against Big Tech in downtown San Francisco were physically assaulted by some Antifa mercenaries gathered for a counterprotest, which – according to The Epoch Times – attracted several hundred participants! The event organizer, Philip Anderson lost a front tooth after he was punched in the mouth, another man wearing a Trump T-shirt had to be taken away in an ambulance after being attacked. Also, a San Francisco police sergeant got injured during confrontations with counter-protesters who were using violence to try and stop the original demonstration.

The rally was organized by Team Save America to protest Twitter’s banning of a NY Post article alleging that Hunter Biden had set up a meeting for a Ukrainian businessman with his father, then-Vice President Joe Biden, during the Obama administration. The Biden campaign has denied the allegations. Likewise, the rally got cancelled before it even started.

Members of the group wore “Make America Great Again” hats and carried U.S. flags. They also carried “Thin Blue Line” flags in support of law enforcement. Anderson posted photos and videos to social media of his bloody mouth with a front tooth missing and another hanging loosely. He said “Antifa” protesters attacked him “for no reason.” The attackers kept calling him the “n” word after they punched him in the face. Anderson twitted a logical/IQ challenge to Joe Biden asking, if he still thinks Antifa is just “an idea”. And yes, you concluded correctly – Anderson’s Twitter account has now been suspended.

At the same time in Washington DC, a young Trump supporter claimed she was assaulted by Black Lives Matter activists for bringing a ‘Trump 2020’ flag to the Women’s March. Isabella DeLuca posted a photo of herself in a cervical collar with a bruised face and lip.

As Jonathan Turley previously wrote, Antifa is indeed more of a movement than a specific organization, but it has members and associated groups. Indeed, it has long been the “Keyser Söze” of the anti-free speech movement, a loosely aligned group that employs measures to avoid easy detection or association. FBI Director Wray told Congress “And we have quite a number — and I’ve said this quite consistently since my first time appearing before this committee — we have any number of properly predicated investigations into what we would describe as violent anarchist extremists and some of those individuals self-identify with Antifa.

“My greatest concern is that we need to take Antifa seriously as a virulent anti-free speech organization. There is a fair criticism of politicians who have refused to denounce the group or even support it. Former Democratic National Committee deputy chair Keith Ellison, now the Minnesota attorney general, once said Antifa would “strike fear in the heart” of Trump. This was after Antifa had been involved in numerous acts of violence and its website was banned in Germany. His own son, Minneapolis City Council member Jeremiah Ellison, declared his allegiance to Antifa in the heat of the protests this summer. During the prior hearing, Democratic senators refused to clearly denounce Antifa and falsely suggested that the far right was the primary cause of recent violence. Likewise, Joe Biden has dismissed objections to Antifa as just ‘an idea’.”