“Day of Freedom”: Germans protest against the coronavirus restrictions 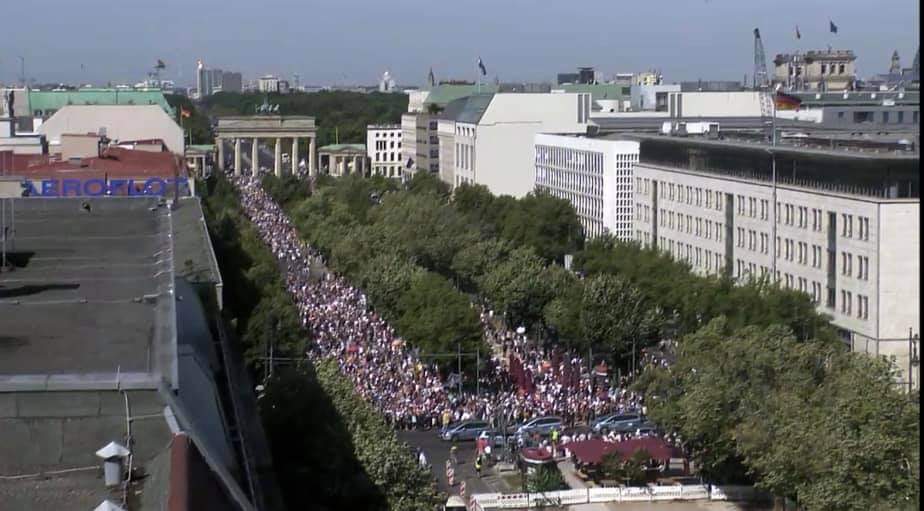 #Massmedia unanimously report that the number of coronavirus cases in Germany has just started rising. Until now, #Germany was supposed to deal with the plague satisfactorily, recording only (compared to other countries) over 9,000 fatalities. It is therefore difficult to say whether the #demonstration against the covid restrain, which took place today (Saturday) in #Berlin, is the population’s response to the lack of signs from the government that it will eventually lift all the #restrictions; or the sudden increase in detected cases is a response of certain governmental organizations, which German health services are a part of, to the growing civilian revolt – #Germans have been protesting restriction of their freedoms since May, in places like #Munich and #Stuttgart. Meanwhile, medical services are gaining newer and better tools to fuel the covid panic: these are #freecovidtests. The reason for the increased testing are people returning from summer vacations who will now potentially infect others. It is difficult to dispute such an argument in a situation where a country has one of the lowest morbidity rates; it’s even more difficult when most, if not all, #coronavirustests show #falsepositive. And those are showing globally, as these tests have been approved by the World Health Organization (#WHO).

The number of people who started marching today at the #BrandenburgGate is estimated at 17,000, but Deutsche Welle reports that the organizers of the event informed on Twitter about “sky-high” numbers gathering, reaching up to 1.3 million! The #leftwingmedia ruthlessly called them “#conspiracytheorists”, “#rightwingpopulists” and “#extremists”, “#nazis” (this term was particularly liked by a small group of counter-protesters), “#antivaccers”, and finally, “#covidiots”, quoting the co-leader of the German #SocialDemocraticParty, #SaskiaEsken. Objective media, such as Reuters, use less polarizing definitions, including: “#libertarians”, “#constitutionalloyalists” or “#antivaccinationactivists” and fairly report the presence of a small, far-right group waving the German imperial flag. The march participants, however, expressed themselves best with their banners and slogans, like those the most frequently quoted by the media: “We are free people!“, “We are making a noise because you are stealing our freedom!“, “Do think! Don’t wear a mask!“, “Natural defense instead of vaccination” oraz “We are the second wave!“. Deutsche Welle is one of the few news outlets (if not the only one), which reported that some banners called for the arrest of certain influential figures, among others #BillGates and #AngelaMerkel.

The American news website, International Business Times, which managed to distinguish between the representatives of the political left and right in the crowd, ultimately equated today’s march with the Nazi steps of coming to power, recalling that the march’s motto, “#DayOfFreedom”, was used by Leni Riefenstahl almost 90 years ago as a title of her propaganda documentary from the 1935 conference of the National Socialist German Workers’ Party. IBTimes also reports that the German police have instituted legal proceedings against protesters for failing to comply with the rules of social distancing and ignoring the mask order. Several organizers were removed by the police during the protest, according to Deutsche Welle, much to the displeasure of the crowd. The demonstrators explain in their own words, that the masks serve to enslave the population and demand the restoration of the democratic rule and respect for individual freedoms. They also point to the fact that many specialists in the field of virology and infectious diseases, and related fields (including biophysics Dr. #AndreasKalcker), who are trying to break through the mainstream narrative about the “deadly pandemic” and the need for restrictive regulations, is silenced and discredited by the mass media. Therefore, the initiative of those fighting for breaking free from the imposed restrictions goes far beyond just any protest – the organizer of one of them, #MichaelBallweg, now runs for the mayor of #Stuttgart.

Concerned citizens who have taken to the streets today, respond to accusations of spreading disinformation that could potentially destroy the health of the global population, that it is in fact quite the opposite: it is the #massmedia and #politicians who #censor all the opposing voices, who promote a #conspiracytheory called the “coronavirus pandemic”.

It is hard to disagree with it. If the information about the existing (and suppressed!) remedies for #covid and the low death rate caused by the virus is untrue, why resort to tyrannical censorship and arrests of peaceful protesters? After all, aren’t these the methods used by all known world regimes, smothering freedom and the historical truth – from the socialist junta, through murderous communism, to bloody Nazism?Sources:https://www.reuters.com/article/us-health-coronavirus-serbia-protests/demonstrators-storm-serbian-parliament-in-protest-over-lockdown-idUSKBN24835R