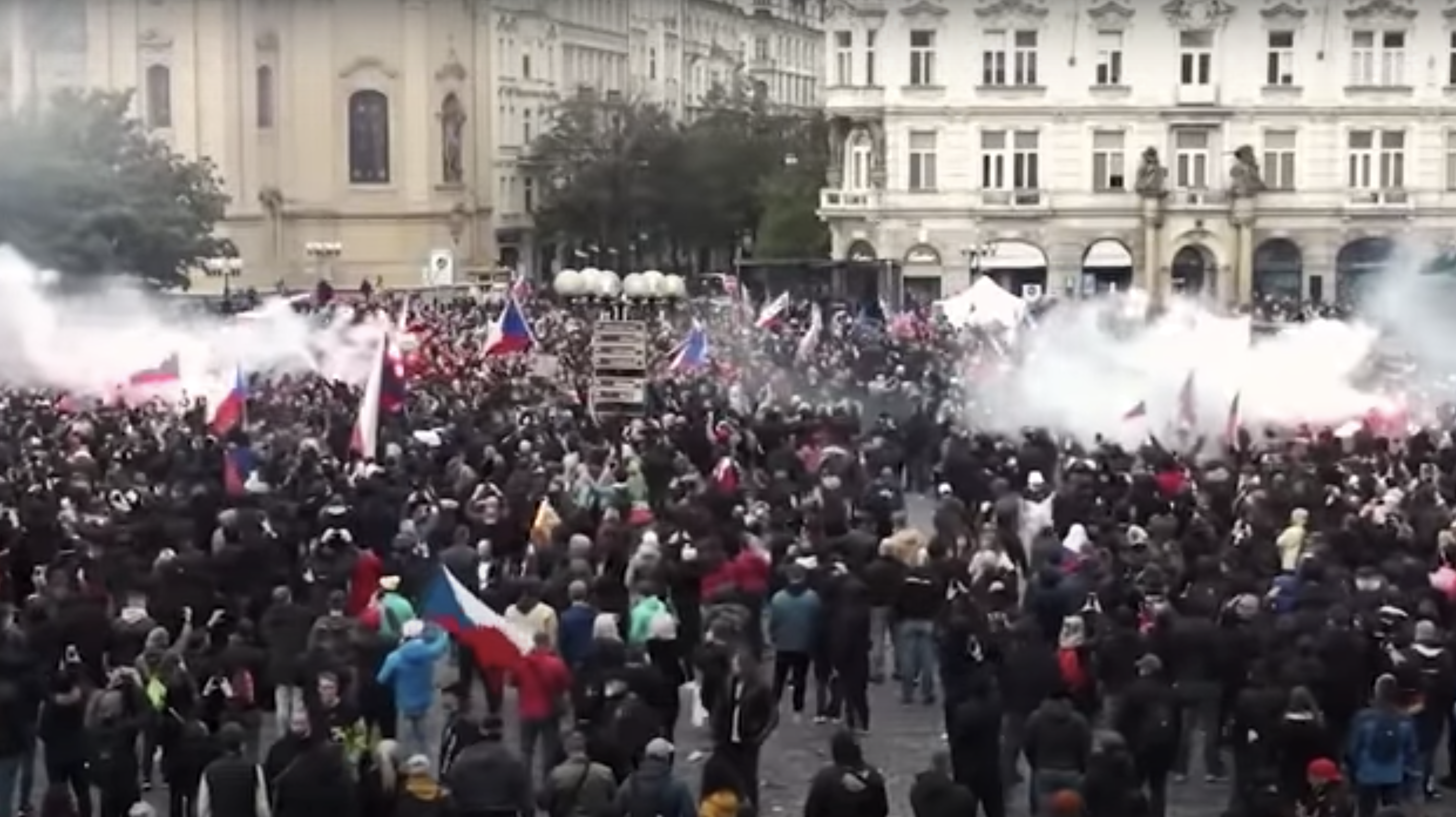 The mainstream media writing about the two demonstrations, that have recently taken place in the Czech Republic and Slovakia, are full of despicable lies about the citizens who went out on the streets.

The blame game spans includes accusations of disregarding the safety protocols and endangering the “innocent”, obedient part of the population (according to Friday’s official data Czech Republic is facing another spike in coronavirus infections, amounting to over 11,000 new cases) eagerly complying with bans and regulations; as well as name calling and insinuations that those who protest, comprise only of ‘far-right’ fanatics and ‘hooligans’, and are falling for a conspiracy.

“From health-dangerous masks to the electronic chips that Bill Gates, the US billionaire who is committing billions of dollars of his personal wealth to medical research and support, would allegedly like to implant in us” – writes Kafkadesk.

No-one should expect less from the media monopolists.

As reported by Balkan Insight website, who sided with the official narrative of a deadly virus lurking to attack us every time we take our masks off: “From Wednesday, the government ordered the closure of most schools, bars, restaurants and sports facilities, the limiting of public gatherings to 500, and face masks to be worn in all indoor and some outdoor public spaces”. Prime Minister Andrej Babis is also considering moving towards imposing a full lockdown.

Man kneeling in front of a water cannon truck, waving a national flag

The same website concludes its report: “At the end of the demonstration, hundreds of protestors refused to leave the square and began throwing firecrackers at the police, who then used tear gas and water cannon to disperse them. Several people were injured in the clashes, according to the Czech News Agency”.

The march organizer, Movement of Civil Disobedience (Hnutí občanské neposlušnosti), is allegedly facing a possibility of being charged with breaking the rules re public gatherings and fined up to €120,000.

“Unlike the Slovak demonstration, the protest that took place in Prague the next day was authorised, provided that the number of participants did not exceed five hundred and that hygiene and sanitary rules were respected. One hour after it began, Czech authorities counted 2,000 people attending, and therefore gave the order to break-up the demonstration.

Far-right protesters from all over the country retaliated with violence and clashed with the police for almost an hour. Czech police used a water cannon and made around 100 arrests. Before the protest began, Czech police had announced they had seized firecrackers, knives and a firearm during preventive checks.”

I will ask you, Dear Readers, to hold that thought for the next few minutes.

Demonstration in Bratislava were an answer to introducing the emergency state in Slovakia, with 2,000 new cases reported by the government officials. News outlets implied that the hundreds of protesters comprised exclusively of football fans and the far-right People’s Party – Our Slovakia, and they wore balaclavas and hoodies and used “paving stones, firecrackers and glass bottles” against the police.

After the protest, Slovak Premier Igor Matovič informed the public, that he plans to subject the entire nation of over 5 mln people to coronavirus tests.

Yet, our team received a completely different account of the events in Prague.

There, is a detailed description of the timeline and happenings DURING and AFTER the protest by Daniela Konečná, the protest participant, posted on the blog.

Today I have to write an article presenting the facts from Staromák (Old Town Square).

I was with my 14-year-old daughter and husband on a peaceful demonstration at Staromák, organized by the HON (Hnutí občanské neposlušnosti) organization (“Movement of Civil Disobedience” or “Citizen Dissatisfaction Movement”). The demonstration was scheduled from 14: 00-15: 00.

The rally program consisted of peaceful expositions of bankrupt tradesmen.

We were given instructions on how to leave Staromák.

Alas: not a single street was accessible!

The rally police disappeared and all of a sudden, there were heavily clad people arranged in three rows, with armored cars. They were all around us.

They put a roadblock in Pařížská street – using a TANK! They didn’t let us out of the Old Town Square!!!

Yes, there were some hooligans and ultras attending the rally, but they were a significant minority among us, regular folk.

The armoured ranks got outnumbered against hooligans.

Then it happened quickly.

I caught the first weaker hit. I wiped my eyes and I helped other people around me to wipe their eyes and bounce back. An older man was knocked down by the crowd, we helped him get on his feet.

Then I was standing at the Czech Television broadcast car and the police threw 2 tear grenades, which fell 1.5 m from me, between the car and the walls of a nearby house.

Despite the intervention, they still DIDN’T WANT TO LET US OUT OF THE OLD TOWN. They vulgarly lie in the newspapers !!!!!

We couldn’t convince any of them. We had to wait until the situation was resolved.

When my high-pitched voice acquired a coarser timbre and I put my daughter in front of me, one heavily armoured man responded with his brain.

He shouted, “There’s a baby, let them pass.”

I feel the need to say that I would have liked to have helped other people as well, very much, but there was no way. They had to help themselves.

So much for the TRUTHFULNESS OF OUR CZECH MEDIA !!!!!

We have yet to hear an honest account of the REAL events in Bratislava.