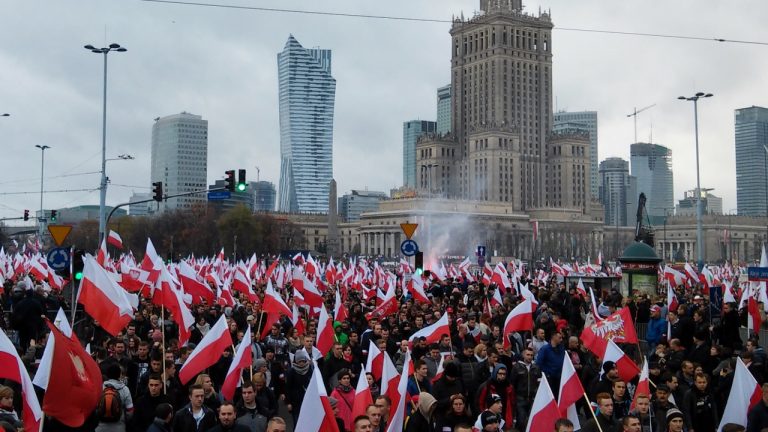 Wednesday was Independence Day marking the 102nd anniversary of Poland declaring to the world it was reasserting it’s sovereignty in 1918. That was at a time of great uncertainty when both the future borders and indeed the very survival of the nascent state were in the balance. Public commemorations this year took place in the shadow of the Covid-19 and the associated restrictions on individual liberty and societal gatherings, and amid mounting warnings of a potentially imminent national lockdown.

· Polish leaders react cautiously to the U.S. presidential election result hoping for the good bilateral relations between the two countries to continue.

Yesterday, Wednesday, the 11th of November, was of course Polish Independence Day, a national holiday in Poland and a day celebrated by Poles throughout the world, including in Ireland. November 11th is better known here as being Armistice Day, marking the end of the First World War in 1918. It was that event which enabled the Polish nation to reassert it’s statehood after 123 years of being partitioned between Russia, Austria-Hungary and Prussia, later Germany.

The celebrations were much different this year in light of the restrictions the government has imposed in the context of Covid-19 including a limit on public gathering to no more than five people, excluding families or people working together. President Andrzej Duda and Prime Minister Mateusz Morawiecki laid a wreath at the Tomb of the Unknown Soldier in Warszawa, at an event attended only by top political leaders and without spectators. President Duda gave a televised addressed which he used to urge people to comply with Coronavirus restrictions.

In recent years the Independence Day March (Marsz Niepodległości) in Warszawa, attended by tens of thousands of people, had been a focus of controversy with claims it’s infiltrated by far-right groups. It’s also been marred by violence. Last Friday the Warszawa President, Rafał Trzaskowski, refused permission for the march to go ahead, citing the Covid-19 situation. Prime Minister Morawiecki had also appealed for the Independence Day March to be called off. The organisers initially sought to overturn the ban through the courts, but their appeal was dismissed by a lower court on Saturday, subject to appeal. On Monday they announced that the march would take place in motorised form, with people driving rather than walking through the capital. Witold Tumanowicz, the vice-president of the organising association, said that ‘Due to all the circumstances, we thought about the formula for a long time. So that everyone can come and celebrate with us this year, we decided to use the car formula.’

On Wednesday afternoon cars and motorcycles decorated with flags and banners took off from the Dmowskiego Roundabout with speeches and patriotic songs broadcast over the radio. Despite the decision to go for a motorised format, several thousand people gathered in the centre of Warszawa with media reporting that police came under attack from some participants near the Charles DeGaulle roundabout, with rioters hurling firecrackers at buildings. A number of people were reported to have been injured with multiple arrests being made. A police statement said that ‘In order to restore order, means of direct coercion are being used.’ After the event, Robert Bakiewicz, the president of the Independence March Association, which organised the event, disassociated their organisation from all provocations, including he said those by the police.

At the time of the announcement of the latest tightening of Covid-19 restrictions in Poland, the government had warned that it was the final step before a national lockdown amid indications that such a measure would be put in place if the daily total of new Covid-19 cases went above the 30,000 mark. This week it’s come very close to that on a consistent basis. Wednesday’s new reported daily cases were 25,221 with 430 deaths bringing the overall total to 618,813 cases and 8,805 deaths. Last Saturday, November 7th, saw a new record of 27,875 cases being reported, while last Friday had the highest reported death toll at 445. In line with the latest restrictions primary schools have been closed since Monday, with education moving online. On Tuesday, a top government advisor on Covid-19, Professor Andrzej Horban, was quoted in Rzeczpospolita as saying that if the 30,000 a day figure is exceeded a full lockdown for a month should be imposed saying ‘We must prohibit people from leaving home without a reason’. He added that travel for work should only be ‘in professions that are vital for the functioning of the country. Everything else should be closed for a month.’

There has been criticism from senior Catholic Church figures and ruling party legislators both of the failure to speedily implement the Constitutional Tribunal ruling from October 22nd removing foetal abnormality as legal grounds for abortion and of a compromise proposal in the face of nationwide street protests against the ruling made by President Andrzej Duda. The verdict only comes into force when it’s published in the official Dziennik Ustaw or Journal of Laws by the Rządowe Centrum Legislacji (RCL) or Government Legislation Centre. It received the ruling on October 27th but has failed to publish it, with government spokespeople arguing the authorities needed some time to consider it and devise a response.

Opposition parties, most of whom favour a more liberal approach, have indicated they won’t support Duda’s plan which would allow for legal terminations where a fatal foetal abnormality has been diagnosed. There are reports that 30 to 40 Prawo i Sprawiedliwość Sejm members are opposed to any watering down of the Constitutional Tribunal ruling. One, Zbigniew Girzyński, commented publicly both criticising the delay in implementation and saying of Duda’s proposal ‘It’s a mistake by the president.’ The President of the Polish Episcopal Conference and Archbishop of Poznań, Stanisław Gądecki, said that ‘The failure to publish the ruling leads to many question marks’ and described Duda’s proposal as a ‘form of euthanasia’ which no Catholic legislator should support.

The ruling has left the government in something of a political quandary as opinion polls show a large majority of the population against the tightening of the abortion regime and sharp falls both in support for Prawo i Sprawiedliwość and in the satisfaction rating of President Andrzej Duda. One poll last week showed his satisfaction rating down 13% to 42%, the lowest figure of his presidency, with 49% dissatisfied, up 12%. The CBOS poll showed support for Prawo i Sprawiedliwość down 5 percentage points to just 33%, the lowest since it returned to power in 2015. However, the vast majority of the ruling bloc’s supporters instinctively support the Constitutional Tribunal’s interpretation of the constitution in terms of respect for life.

Poland’s leaders were among those worldwide who reacted the most cautiously to the apparent defeat of incumbent U.S. President Donald Trump in last week’s elections, subject to the outcome of various legal challenges. This was likely a reflection of the warm ties between the Trump administration and the Polish government which had manifested themselves in concrete forms including visa free travel for Polish nationals to the U.S., increased U.S. troop numbers in the country and just last month a civilian nuclear energy cooperation agreement. Nonetheless by last weekend Polish leaders were expressing optimism for a continuation of strong bilateral ties between Poland and the U.S. under a putative Biden administration.

On Saturday, President Duda, whose own re-election President Trump assisted with a White House visit shortly before first round polls in June, tweeted ‘Congratulations to Joe Biden for a successful presidential campaign’, adding ‘As we await the nomination by the Electoral College, Poland is determined to upkeep high-level and high-quality PL-US strategic partnership for an even stronger alliance.’ Foreign Minister Zbigniew Rau later also tweeted his congratulations writing ‘Congratulations to Joe Biden and Kamala Harris on their electoral victory. We’re looking forward to working with the new U.S. administration.’ adding that Poland ‘remains determined to further develop Polish-US Strategic Partnership and strengthen transatlantic relations.’

Not surprisingly the former Polish Prime Minister, and current President of the European People’s Party, Donald Tusk, was more enthusiastic in welcoming the reported result tweeting ‘Trump’s defeat can be the beginning of the end of the triumph of far-right populisms also in Europe. Thank you, Joe.’.

In Monday, it what could prove one of the final acts of the close collaboration between the governments of the two countries during the Trump administration, President Duda formally ratified the new Enhanced Defence Cooperation Agreement (EDCA) between Poland and the U.S. at a ceremony at the Presidential Palace in Warszawa, attended by the Foreign Affairs and Defence ministers as well as the U.S. Ambassador to Poland, Georgette Mosbacher.

Finally, we hope that all our readers had a wonderful Polish Independence Day 2020 📣