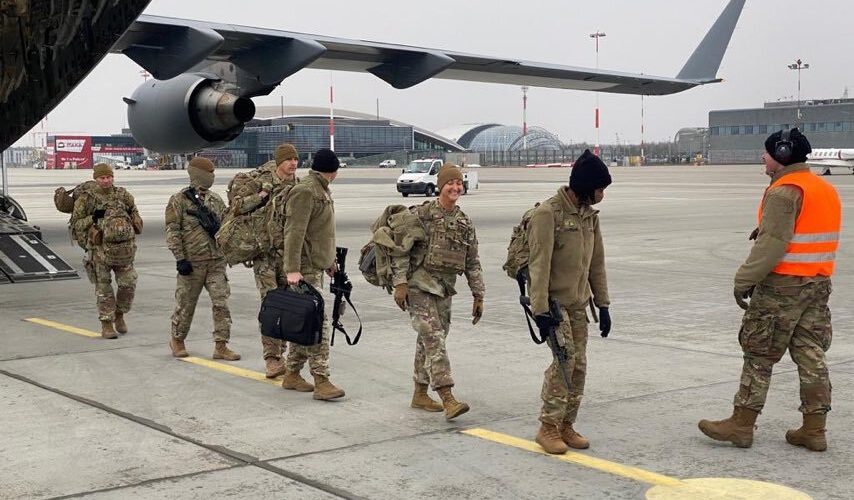 It’s been a week with many interesting news developments in Poland including the arrival of additional U.S. troops in the country in response to the Ukraine crisis. Whatever threat Poland may face from the East, nothing can be a more vivid demonstration of how different, and stronger, Poland’s geopolitical situation is today as a member of NATO compared to the past, than the sight of members of the 82nd Airborne Division walking off U.S. Air Force transport planes. Meanwhile, the Polish government looks to be embarked on a series of political damage limitation exercises, with Finance Minister Tadeusz Kościński being fired over the handling of Polski Ład taxation changes, the unveiling of plans to scrap the Disciplinary Chamber of the Supreme Court, and a bilateral agreement to settle the Turów lignite mine dispute with Czechia. The cynic might say that nothing more clearly illustrates the illogicality of the response to Covid-19 than the government now promising the imminent scrapping of nearly all restrictions having only the previous week tried and failed to introduce a grotesque workplace testing requirement. However, if a genuine return to normality is followed through on, and most importantly includes the abolition of all Covid-19 restrictions, it will be most welcome.

• the government relaxes some Covid-19 restrictions including announcing the reopening of schools a week earlier than planned.

Additional U.S. troops and military hardware has arrived in Poland as part of the reinforcement of NATO’s eastern flank announced by the Biden Administration. Defence Minister Mariusz Błaszczak tweeted that ‘More US planes are landing in Poland. This is one of the preparatory stages for the U.S. force deployment. The forces of the 82nd Airborne Division, one of the most renowned U.S. units, will soon reach Poland’. Earlier he had commented that ‘This is a clear signal of allied solidarity in response to the situation in Ukraine’.

Under the plan, around 1,700 U.S. personnel, mainly from the 82nd Airborne Division, are temporarily deploying to Poland, while another 1,000 troops normally based in Germany are going to Rumania. Approximately 4,500 U.S. troops are routinely stationed in Poland on a rotating basis.

The Polish and French Presidents, along with the German Chancellor, held three way talks in Berlin on Tuesday focused on the Ukraine crisis. The talks were under the umbrella of the Weimar Triangle regional cooperation grouping. Poland’s Andrzej Duda told a press briefing afterwards that ‘We have to find a solution that will allow us to avoid war – this is our fundamental task’. He added that ‘I’m confident we will achieve this’.

Despite the summit meeting, there’s been considerable criticism in Poland of the stance of the German government in the crisis, specifically its failure to make a clear statement that if Russia did invade Ukraine that would be the end of the controversial Nord Stream 2 natural gas pipeline project. The same consideration was reportedly the reason why the Ukrainian President Volodymyr Zelensky didn’t proceed with a planned meeting with the visiting German Foreign Minister Annalena Baerbock on Monday.

At a joint White House press conference on Monday with U.S. President Joe Biden, German Chancellor Olaf Scholz remained non-committal on the Nord Stream 2 question saying only that  Germany and the U.S. ‘will act unanimously in terms of sanctions’ in the event of an attack on Ukraine. Biden commented that ‘If Russia invades — that means tanks or troops crossing the border of Ukraine again — then there will be no longer a Nord Stream 2. We will bring an end to it’.

Macron on Diplomatic Mission to Moscow

Meanwhile this week’s visit to Russia by French President Emmanuel Macron looks to have achieved close to nothing in terms of defusing tensions. Macron held more than five hours of talks with the Russian President Vladimir Putin on Monday. Putin defiantly told a press conference afterwards that ‘I want to underscore once again even though I have already mentioned it — I’d really love if you really hear me and bring this point to your audience, that if Ukraine is in NATO and if they decided to take back Crimea using military means, European countries will automatically be in a military conflict with Russia’.

The now former Polish Finance Minister, Tadeusz Kościński, this week paid the political price for a wave of criticism of the detailed implementation of Polski Ład taxation changes, actually intended to boost the government’s sagging political fortunes. Commentators had pointed out multiple scenarios in which even low-income taxpayers, meant to be the big beneficiaries from the changes, would be worst off. On Monday a four-hour meeting of the top leadership of Prawo i Sprawiedliwość took place in Warszawa to discuss what steps to take over the fiasco, after which spokesperson Anita Czerwińska said that Kościński had resigned and that Prime Minister Mateusz Morawiecki would act as Finance Minister pending the appointment of a permanent replacement.

Kościński’s position as minister had looked to be in jeopardy after comments by Prawo i Sprawiedliwość party leader Jarosław Kaczyński that officials in charge of the taxation changes ‘on the political and semi-political level didn’t quite handle their responsibilities’ correctly. He added that ‘Maybe it was due to a lack of sufficient qualifications, maybe also due to a lack of goodwill’ and ominously for Kościński that ‘those responsible will face consequences’.

In January Prime Minister Morawiecki said in relation to the Polski Ład taxation changes that the government was ‘aware of the programme’s shortcomings’ and ‘I have ordered the Finance Ministry to make several corrections that will benefit the taxpayer’. Piotr Nowak, the current Minister for Economic Development and Technology, is being touted as a potential successor to Kościński.

The recent monetary policy tightening by the Narodowy Bank Polski continued this week with the fifth straight rise in the benchmark interest rate – this time by 0.5% bringing the rate to 2.75%. The move is of course in response to the recent sharp rise in inflation which hit 8.6% in December. Prior to the round of increases which commenced in October the benchmark interest rate was just 0.1%.

The Polish government has recently appeared keen to draw a conclusion to a number of controversies that have cumulatively probably contributed to a perceived decline in its own political fortunes. Last Thursday, following lengthy consultations with the government, President Andrzej Duda said he was proposing a bill to parliament for further changes to the country’s judicial system. As long flagged, this includes the disbandment of the Disciplinary Chamber of the Supreme Court, whose activities, and the government’s refusal to suspend them, have been at the centre of the dispute with the European Union institutions over the so-called ‘rule of law’ agenda.

Duda told reporters that he hoped the measure would facilitate the resolution of the issue with the EU and unlock Covid-19 economic recovery funding for Poland that’s been stalled over the row. Poland is currently the subject of a €1 million a day fine from the European Court of Justice for defying a ruling to suspend the work of the Disciplinary Tribunal. Poland argues the EU has no competence over the internal workings of its judicial system.

Last Friday Prime Minister Morawiecki announced that Czechia has withdrawn its legal action against Poland at the European Court of Justice over the Turów lignite mine. It followed the signature a day earlier in Prague by Morawiecki and his Czech counterpart of a bilateral agreement to resolve the issue. Under the agreement Poland will pay Czechia €45 million in compensation for environmental damage caused by the expansion of the mine, as well as undertake some remediation works including the building of a protective underground barrier to prevent water levels from dropping. Morawiecki said the agreement could help open a new chapter in relations between the two Visegrád Group members. Poland had been ordered to close the mine pending the final determination of the ECJ case and been subject to a €500,000 a day fine since September for refusing to comply.

EU Commission to Deduct Turów Fines From Funding to Poland

However, Poland isn’t completely out of the woods over the Turów issue yet. On Tuesday the European Commission said that it had informed Poland that it would proceed with the offsetting of payments due to the country against penalties owed under the Turów case. It plans to initially withhold €15 million euro in funds Poland would otherwise receive to cover the first month of unpaid fines from September 20th to October 19th.

The Polish government reacted sharply to the move saying it would mount an appeal. It cited the fact it disputes the power of the court to issue such an order, that the dispute has now been resolved on a bilateral basis, and also its rationale for keeping Turów open in terms of European energy security. Spokesperson Piotr Müller said that the government had tried ‘to protect the country’s energy security and the stability of employment in the power sector’ and that ‘this is especially important in the context of the current geopolitical threats from Russia’. He went on to say that ‘in Poland’s view, the rulings by the European Court of Justice regarding Turów have no legal or factual basis, overstep European Union Treaties, and violate energy security guarantees enshrined in the Treaties’.

The government has also moved to change its rhetoric on Covid-19 restrictions. On Wednesday Health Minister Adam Niedzielski, who just two weeks ago was reported to be on the verge of quitting over the lack of even more restrictive measures, announced that schools would reopen for in-person classes on February 21st, a week earlier than planned, the shortening of isolation for infected people, and reduced quarantine. He indicated that if current trends continue, remaining restrictions could be lifted next month. He told a press conference that ‘This is the first step in the return to normality’.