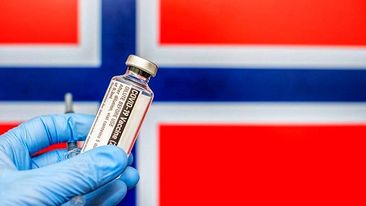 Following the article from Gript.ie:

“Bloomberg.com has reported that 23 people have died in Norway a short time after receiving the first dose of the Pfizer/BioNTech vaccine.

The Norwegian Medicines Agency say that so far 13 autopsies have been conducted, the results of which suggest common side effects of the injections may have led to the severe reactions experienced in its frail, elderly recipients.

The medical director of the NMA Dr. Steinar Madsen said his agency saw no reason to be alarmed by the deaths.

“We do not see anything alarming with these figures. All deaths are in elderly and frail people with underlying diseases,” ,he said.

The news has prompted updates in the country’s Covid-19 vaccination guidelines however, with the Norwegian Institute of Public Health saying the benefits of the injection to those who are very frail might be “marginal”.

“For those with the most severe frailty, even relatively mild vaccine side effects can have serious consequences,” a statement by the health authority explained.

“For those who have a very short remaining life span anyway, the benefit of the vaccine may be marginal or irrelevant.”

The institute recommended further assessments of whether giving the vaccine to frail nursing home residents is appropriate.

The side-effects experienced by those who died shortly after taking the vaccine are said to be harmless to most people, although 29 other people in Norway have reported adverse reactions to the injection, with nine of them thought to be serious.

The NMA had previously warned that more people would die with – not from – the vaccine, as nursing homes in the country typically experience an average of 350-400 deaths in a normal week.

Side-effects of the vaccine include fever, nausea and soreness at the point of injection.

Bloomberg notes that allergic reactions to the vaccine have been rare in the United States so far:

In the U.S., authorities reported 21 cases of severe allergic reactions from Dec. 14-23 after administration of about 1.9 million initial doses of the vaccine developed by Pfizer Inc. and BioNTech SE. That’s an incidence of 11.1 cases per million doses, according to the Centers for Disease Control and Prevention.”

From the team of Hello Irlandia:

At the same time the CDC is reporting as of tonight, 15 Jan 2021, that there were 6,741 adverse events (including 44 deaths and 58 anaphylactic reactions and shocks) reported via their passive Vaccine Adverse Event Reporting System. It gives 567 adverse event cases per million doses. Therefore the myth that the rate of adverse reactions to vaccines is 1 in a million is clearly out the window.