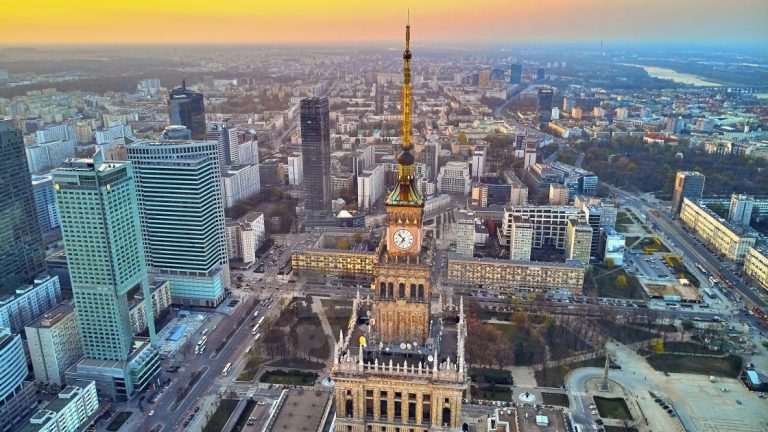 The past two weeks have seen the Covid-19 situation in Poland return to dominate the news agenda following the resolution of the political crisis within the ruling bloc and a sharp escalation in the number of reported ‘cases’. The measures announced in response have brought into even more sharp relief the dire consequences for personal freedom and also the economy. How all this plays out politically in the longer term and how long the patience of the population will endure, especially for measures which have no beneficial practical effect, time will tell.

Our main stories covering the past two weeks include:

Since last Saturday all of Poland is once again categorised as at least a ‘yellow zone’ for the spread of Coronavirus with various additional restrictions reimposed having being relaxed earlier in the year. Health Minister, Adam Niedzielski, threatened people that disagree and don’t comply with the regulations that they would be ‘severely punished’. Among the curtailments of civil liberties is a requirement to wear face coverings in all public places excluding parks and forests.

Covid-19 warning signs from earlier in the year. A public health measure or an unwarranted attack on individual freedom and basic human rights? (“File:COVID-19 pandemic in Prudnik, 2020.04.24.jpg” by Wlodek k1 is licensed with CC BY 3.0. To view a copy of this license, visit https://creativecommons.org/licenses/by/3.0)

On Monday Ryszard Terlecki, the chairman of the Prawo i Sprawiedliwość parliamentary club said that the introduction of a state of emergency wasn’t being ruled out if the Covid-19 situation worsened dramatically. He said, however, that ‘I think not just yet. As we watch other countries that have introduced a state of emergency, specifically Slovakia and the Czech Republic, little has changed there.’

On Wednesday a record 6,526 cases were reported, the highest since the so-called ‘pandemic’ commenced. 116 new deaths ascribed to the virus were also reported. Last Saturday had seen what was at that point a record 5,300 new cases reported with 4,178 on Sunday, 4,394 on Monday and 5,068 on Tuesday. Of course compared to other European countries Poland remains very much in the lower tier of those affected by Covid-19 with 70 deaths per million of population. What the exact purpose of highlighting daily figures of ‘cases’ (most of whom individually are suffering no or very minimal ill effects) is beyond causing public alarm and seeking to manufacture support for the type of restrictions on civil liberties and infringement of human rights that just a few months ago would have been unimaginable is questionable to say the least.

As of Wednesday the total number of Covid-19 cases reported in Poland stood at 141,804 with 3,217 deaths being attributed to the virus, albeit with the vast majority of those already suffering from serious underlying health conditions.

On Saturday Prime Minister Mateusz Morawiecki told a news conference in Warszawa that schools will remain open saying ‘For now, we don’t see a need to reintroduce mandatory distance learning. Morawiecki also claimed that the government wanted to protect the economy and avoid another full lockdown. The government says its considering a relaxation of Sunday trading rules, which currently see most large shops shut, to reduce crowding in shops at other times. Street protests took place against some of the new measures on Saturday.

On Tuesday of last week President Duda formally appointed the new reshuffled cabinet of Prime Minister Mateusz Morawiecki, following the resolution of the recent crisis within the United Right or Zjednoczona Prawica bloc. The highlight of the reshuffle was of course the formal appointment of Poland’s most powerful politician, Jarosław Kaczyński, as a Deputy Prime Minister. The ceremony was delayed from Monday due to the diagnosis of the incoming Education Minister, Przemysław Czarnek, with Coronavirus. Czarnek was absent from the outdoor ceremony in the gardens of the presidential palace in Warszawa. Czarnek himself was a controversial appointment to the new cabinet, being criticised by some for past comments which were viewed as being anti-LGBT.

In addition to Czarnek a number of other prominent Polish political figures have been diagnosed with Covid-19, including the now former Sports Minister, Danuta Dmowska-Andrzejuk. She said she felt fine and was asymptomatic. On Tuesday Prime Minister Morawiecki said he had gone into quarantine after coming into contact with a security officer infected with the virus. He stressed that ‘the government is working normally ‘with a spokesperson saying that Morawiecki hadn’t been diagnosed with Covid-19 and was showing no symptoms. On Wednesday it was reported that a Deputy Prime Minister, Piotr Gliński, was in quarantine after also being in close contact with a positive case – at an event attended by a Catholic bishop who has received a positive diagnosis. He’s also said to be feeling well.

The post of Finance Minister in Poland looks to be running the risk of being perceived as unwanted given the number of changes in personnel. The current incumbent, Tadeusz Kościński, in the post since just last November has also been seeking an exit – he was one of two candidates vying for the post of President of the London-based European Bank for Reconstruction and Development. However, he lost out in a secret ballot to France’s Odile Renaud-Basso at the bank’s AGM, held virtually, last Thursday. The EBRD was established in 1991 to assist with investment in Eastern European countries during their transition to the market economy. The institution is owned by 69 states as well as the European Union and the European Investment Bank. Ireland’s Finance Minister, Paschal Donohoe, was unanimously elected chair of the board of governors of the EBRD for the next year.

The political crisis in Belarus is continuing with ongoing implications for relations between Poland and its eastern neighbour. Last Friday more than 30 Polish diplomats left Minsk being effectively expelled following a request from Belarus for Poland to scale back the number of staff at its embassy. A similar request was made to Lithuania which recalled five diplomats on Friday. Poland and Lithuania had initially refused to comply with the request and then recalled their ambassadors from Minsk. Belarus in turn recalled its ambassadors from the two countries on Friday.

The Belarusian move has been widely condemned with Foreign Secretary Dominic Raab saying the UK was ‘temporarily recalling’ it’s ambassador ‘for consultations on the situation in Belarus’. Several other countries including the Czech Republic, Germany and Rumania have done the same in solidarity with Poland and Lithuania. Belarus has accused both countries of interfering in the country’s internal affairs in the wake of the mass public protests that followed the re-election of President Alexander Lukashenko in the disputed August 9 presidential election.

European Union foreign ministers agreed on Monday to sanction top Belarusian officials including President Lukashenko over the violent crackdown on protests. Lukashenko himself was not on the original EU sanctions list of 40 individuals on October 2nd. The sanctions will likely involve the freezing of any assets held in EU countries as well as a travel ban – measures likely to have little or no practical effect.

On Sunday President Andrzej Duda commenced a three day visit to another of Poland’s eastern neighbours, Ukraine, with a stop at a Polish military cemetery in Kiev. The visit included talks with Ukrainian President, Volodymyr Zelensky, as well as other top political leaders. On Monday the two heads of state signed a joint declaration outlining goals for their bilateral relations. Duda’s chief of staff, Krzysztof Szczerski, described the declaration as an ‘extremely important document that comprehensively outlines the strategy and goals of our joint Polish-Ukrainian policy and Polish-Ukrainian relations in various areas for the coming years.’ Szczerski also said that Poland wants to invest in Ukraine including in the country’s energy sector.

The joint declaration strongly supported Ukraine’s position in its ongoing conflict with Russia calling for an end to what it termed the ‘illegal occupation’ of Crimea and to ‘ongoing aggression’ in Ukraine’s eastern Donbas region. In a reference to the current situation in Belarus the two leaders stressed ‘the right of citizens of all countries to decide on their future as a result of democratic elections’.

Polish naval experts on Tuesday successfully neutralised a massive British Second World War bomb, known as a ‘Tallboy’, discovered last year in Świnoujście in north west Poland. It was found at the bottom of a canal, close to a ferry crossing, during waterway deepening work. The device was detonated in a controlled explosion. Over 750 people had to be evacuated from their homes nearby. No one was injured during the successful operation. The ‘Tallboy’ was a 5.4 tonne air-dropped bomb used extensively by the Royal Air Force during the Second World War.

Poland’s Nobel Prize Winner for Literature, Olga Tokarczuk, has announced the launch of a new foundation to support culture. The Olga Tokarczuk Foundation, based in Wrocław, aims to ‘promote human rights, democracy, civil society, as well as supporting activities for the environment and animal rights, fighting discrimination, supporting women’s rights and promoting Poland.’ Tokarczuk told a press conference in Wrocław that her husband, Grzegorz Zygadło, will be the foundation’s president.

Given everything else that’s going on in the world at present, we really should celebrate good news and this week Poland had some very good and indeed unusual news in the field of sport with Saturday’s victory by teenager Iga Świątek in the French Open Ladies Singles Tennis Championships. It was Świątek’s first Grand Slam title and she’s also the first Polish athlete to win a tennis grand slam singles title. The unseeded Pole defeated Sofia Kenin of the United States, 6-4, 6-1 at Roland Garros. Świątek, whose just 19 years old, is a former junior Wimbledon champion. In a Twitter post President Duda said ‘Great thanks and congratulations for Iga Świątek! A historic day for Poland, for Polish sport and for Polish tennis.’

A positive note on which to end.