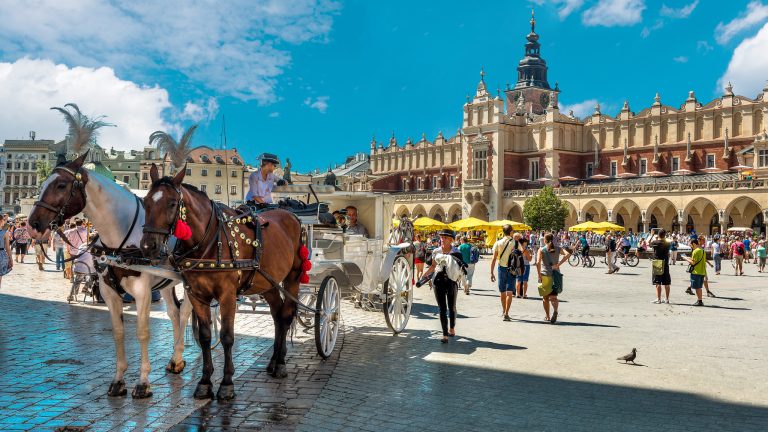 Poland has seen two very important anniversaries commemorated over the past week – the 40th anniversary of the 1980 August Agreements, signed in Gdańsk, which marked the birth of the Solidarity free trade union and well as the 81st anniversary of the outbreak of the Second World War.

Our other main stories include:

• Poland bans flights from 44 countries in a tightening of Coronavirus restrictions.

August 31st marked the 40th anniversary of the signing of the Gdańsk Accords in 1980 which marked the first time that a Communist regime in Eastern Europe had recognized an independent trade union. The rise of Solidarity set Poland for a brief period on a path to greater political freedom albeit at a time of dreadful economic hardship. Although that hope was brutally crushed by the declaration of martial law in December 1981, it proved the inspiration for Poland’s freedom struggle which ultimately culminated in the events of 1989. Polish leaders speaking about the Gdańsk Accords this week emphasized the importance of the rise of Solidarity not only for Poland but also in an international context.

In his tribute President Andrzej Duda said that ‘August 1980 was the foundation of a free Poland’ and ‘a historic breakthrough that gave rise to momentous changes that transformed Europe and the world.’A similar point was made by the German Chancellor, Angela Merkel, who in a video posted online last Saturday described the Solidarity activists as ‘European heroes of freedom’. She said that ‘both in Eastern and Western Germany, we closely watched what the fearless Polish women and men had achieved through their fight’.

Ceremonies were held in Poland to mark the occasion with tributes also paid internationally. One of the most eye-catching was in Rio de Janeiro, Brazil, where the Solidarity logo, the Polish word ‘Solidarność’, was projected onto the famous Christ the Redeemer statue. In Dublin, on Monday a huge Solidarity banner was erected on the Liberty Hall building and in the evening the building was illuminated by a light projection of the Solidarity logo in tribute to the free trade union, at the headquarters of SIPTU, Ireland’s largest trade union. In Belfast, the City Hall was lit up in red and white and the Solidarity logo was beamed onto the MAC, the Metropolitan Arts Centre building, to mark the occasion.

In remembering the dramatic events on the Polish Baltic Sea coast in August 1980, we should also recall that before them in July 1980 there were the strikes in Lublin – to quote the Polish phrase prominently displayed in the eastern city this year ‘Przed sierpniem był lipiec’.

At dawn on Tuesday ceremonies were held at both Westerplatte and in the central town of Wieluń to make the 81th anniversary of the outbreak of the Second World War. President Duda and Defence minister Mariusz Błaszczak were among those taking part in the ceremonies at Westerplatte near Gdańsk where the German battleship Schleswig-Holstein opened fire on a Polish military depot at 4.45am on September 1st, 1939. Duda said that the events at Westerplatte – where Polish forces held out for a week in the face of the German onslaught against overwhelming odds becoming a symbol of national pride – was ‘a warning to the world…that such events should never happen again.’

Prime Minister Mateusz Morawiecki attended the commemorations in Wieluń, at the time a city near the German-Polish frontier, where aerial bombing commenced at 4.40am. Morawiecki said that Poland is ‘the guardian of the memory’ of World War Two in the face of what he termed attempts by some to rewrite history and ‘blur the truth about the war’.

Last Saturday, Szymon Hołowia, the former television journalist who took 14% of the vote in the first round of the presidential election in June, formally launched his new centrist political movement called Polska 2050 – at a congress in Warszawa. He said he’d decided to launch the movement towards the end of August as a tribute to the heroes of August 1980. Hołownia promised to ‘start working in a way that has not been seen yet in Polish political organisations’.

While Hołownia’s political star briefly shone brightly in the first round of the Presidential election before Rafał Trzaskowski replaced Małgorzata Kidawa-Błońska as the Platforma Obywatelska candidate, translating that broad appeal as a spokesperson for a more centrist and consensual type of politics into a solid party political base will be a massive organisational challenge.

Meanwhile, the Warszawa President and former national presidential contender, Rafał Trzaskowski , has come under pressure since a recurrence of the sewerage treatment problem in the Polish capital, at the end of last week. A failure in a transmission pipe to the Czajka sewage treatment plant, almost exactly a year since a similar incident, has resulted in sewerage flowing directly into the Vistula river to avoid flooding in the capital. City officials have said that the sewage is being treated with ozone before being release minimising health risks. Prime Minister Mateusz Morawiecki has pledged the government’s support in resolving the issue, with Chancellery minister Michał Dworczyk telling a news conference that they would help build a temporary pipeline to relieve the crisis. His comments came after a meeting of the crisis management committee dealing with the issue.

The Deputy Minister of Maritime Economy and Inland Navigation, Grzegorz Witkowski, commented on Saturday that ‘once again we are up against the wall because of the Warszawa President and the city’s sewage treatment company’. Trzaskowski stressed that the lessons from last year had not been ignored but that it took time to completely overhaul an antiquated system. On Tuesday a spokesperson for the District Prosecutor’s Office said that prosecutors have opened an investigation into the matter to determine quote ‘if public officials failed to fulfil their duties in properly supervising the collection of wastewater’.

The Polish government has this week announced a tightening of some Coronavirus restrictions with direct flights being banned until September 15th, albeit with exceptions, from 44 countries with effect from yesterday. The list includes Spain, Malta and Rumania within the European Union.

As of Wednesday morning the total number of reported Coronavirus cases in Poland stood at 68,517 with the number of deaths attributed to the virus now at 2,078, the vast majority of whom suffered from other serious health conditions.

On Tuesday President Duda’s chief of staff, Krzysztof Szczerski, announced that a special meeting between the head of state and members of the cabinet, known as a Cabinet Council, will be held at the Presidential Palace on Friday to enable the government to update the President on the current status of the Coronavirus situation and it’s implications, as well as discuss what further steps could be taken.

Poland’s Central Statistical Office said on Monday that Polish GDP contracted by 8.2% in the second quarter of the year in the face of the Coronavirus lockdown, confirming an earlier estimate. This compared to growth of 2% in the first quarter. The government is forecasting an overall GDP contraction of 4.6% for the year as a whole, which Finance minister Tadeusz Kościński has claimed would be the smallest drop of any European Union member state.

In an initial estimate on Tuesday the Central Statistical Office reported that inflation stood at 2.9% in August compared to 3% in July.

The opposition protests against the result of the August 9th presidential election in Belarus have continued over the past week. On Tuesday dozens of university students were arrested for protesting in Minsk as third level colleges reopened. Prime Minister Morawiecki called on Russia not to intervene militarily in the situation in Belarus saying that Poland ‘urges Russia to immediately withdraw from plans for a military intervention in Belarus, under the false excuse of ‘restoring control’ – a hostile act, in breach of international law and the human rights of the Belarusian people, who should be free to decide their own fate.’

His comments came after President Putin said last Thursday that Russia had agreed to set up a reserve police force which could be sent into Belarus, but only if the situation there ‘gets out of control’ in the view of Moscow. Lukashenko has accused Poland of plotting to annex the Grodno region of Belarus, something Poland has totally rejected.

Last Friday EU foreign ministers discussed the situation in Belarus at an informal meeting in Berlin. Afterwards the new Polish foreign minister, Zbigniew Rau, said that Poland supported plans for targeted sanctions against high-ranking Belarusian officials. He said that ‘We are ready to draw up sanctions on the one hand, and this process has already started, and on the other an EU package for Belarusian society’.