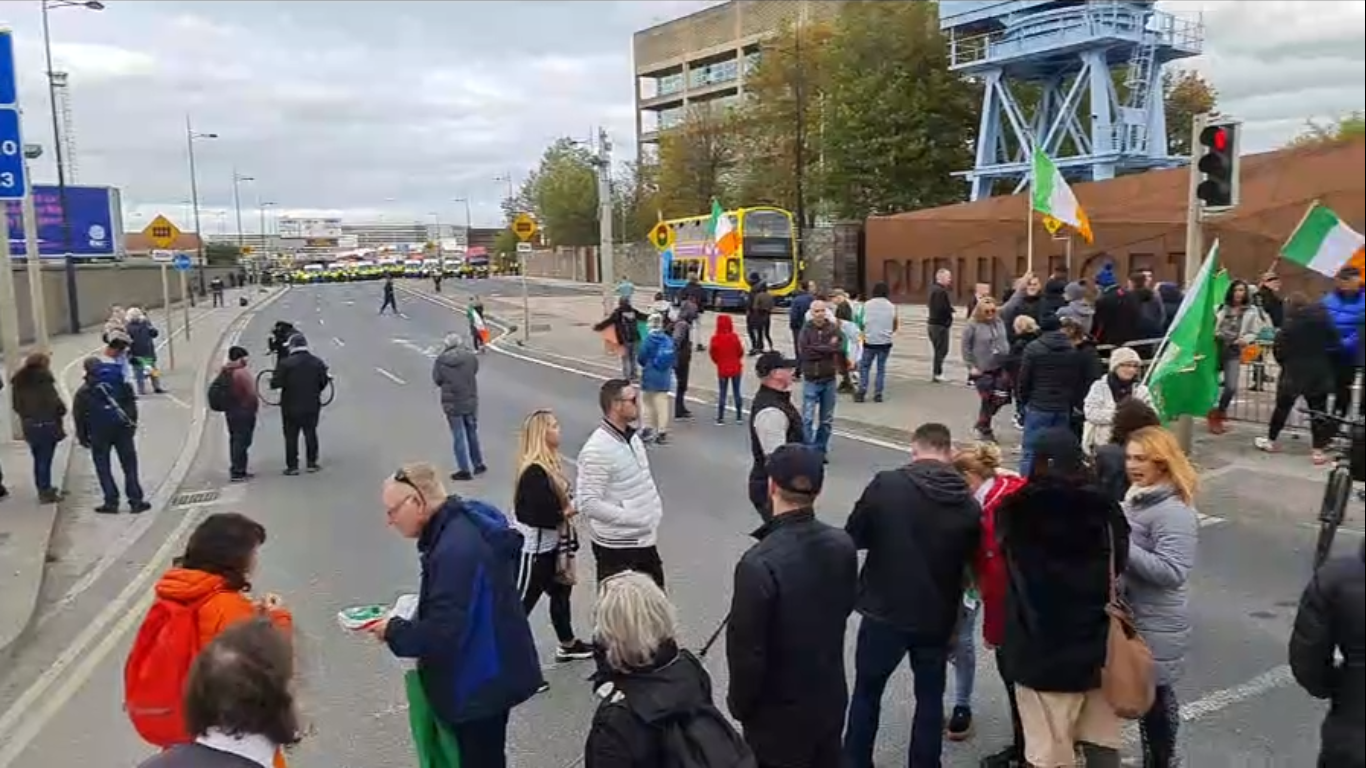 Today at 2pm on O’Connell Bridge in Dublin a significant group of protesters gathered to show their dissent from the imposed lockdown level 5 restrictions which are in operation from today onwards for 6 weeks.

After few brief speeches, the protesters moved along Custom House Quay and N Wall Quay until they reached the Samuel Beckett Bridge where the line of the Garda members was blocking the way further down the river.

The march under many tri-colour flags turned left to Guild Street and then to the right and continued down the Upper Sheriff Street towards the Dublin Port buildings at East Wall Road where the protesters having arrived at the crossroads started occupying the road at the traffic lights for about an hour and a half.

There were some more speeches and some participants of the gathering performed the sitting protest on the road in front of the trucks unable to continue their journey. The traffic was completely stopped at that Sheriff Street/East Wall Street junction creating a long queue of trucks, cars and buses. The Garda members supported by their vehicles situated themselves across East Wall Street to the North of the protesting people. Some protesters were calling on them to review their position and decide who they should serve – the government which lost credibility or the public.

The atmosphere at the cross-roads was very jolly supported by some music thanks to a mobile loudspeaker brought in by the protesters. People were singing along, waving their flags and dancing. There was another date announced for next gathering for this Saturday at GPO at 2 pm again.

About 4.45pm the anti-lockdown group of protesting members of the public moved back towards the city centre following the same rout they had used before. Close to the Samuel Beckett Bridge Gemma O’Doherty was spotted trying to convey an important message to the Garda members blocking Mayor Street Upper on the potential dangers of the upcoming COVID19 vaccines. The crowd started dispersing shortly after that point.

The protest was peaceful and drawn attention of many watch parties on Facebook, one of them having around a thousand followers.

The admins of Hello Irlandia want to thank to Radoslaw Kaliszuk who was streaming live the above described events.