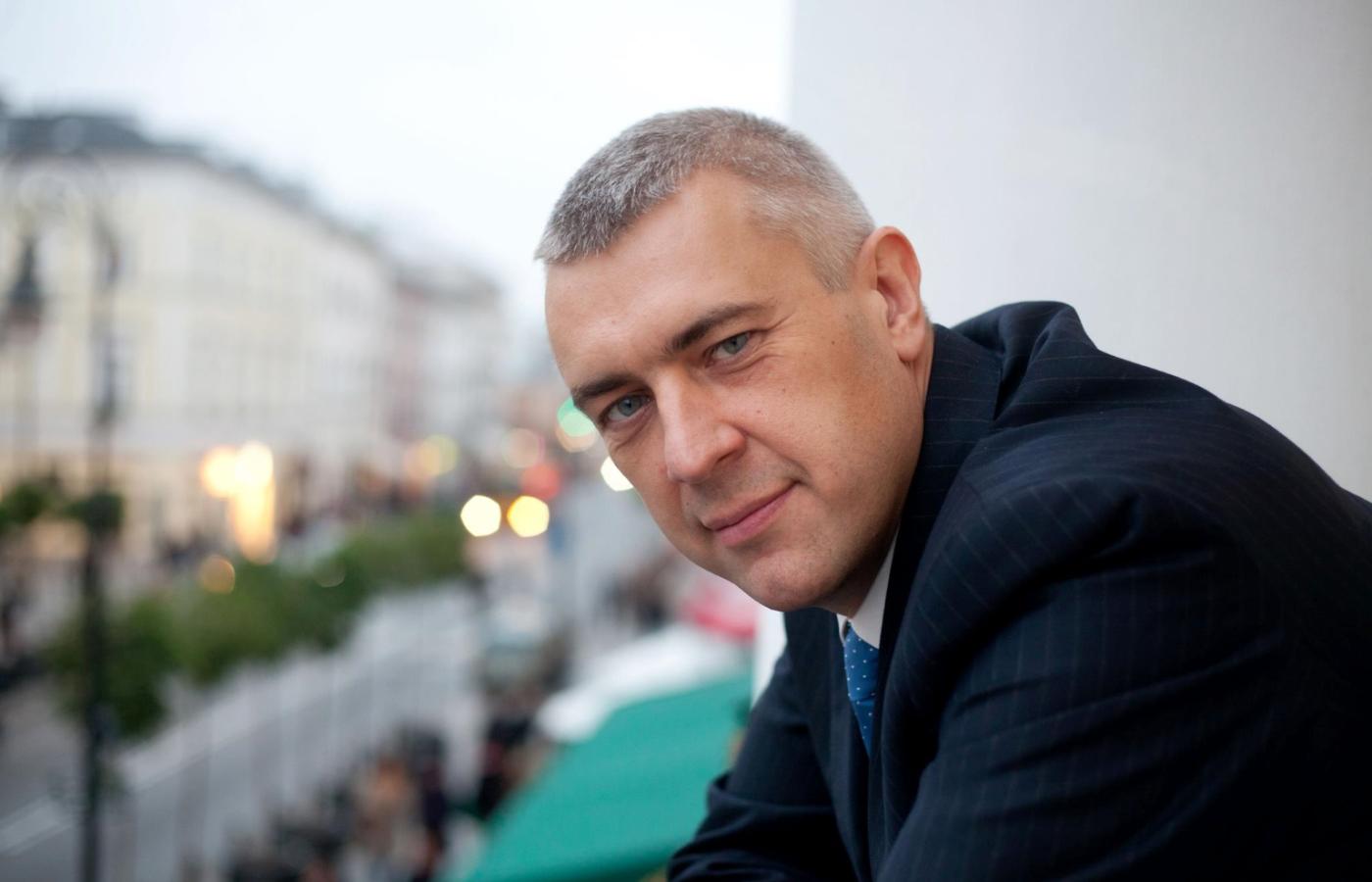 The news agenda over the past week in Poland has once again been largely dominated by Covid-19 and the government’s response to it in terms of further restrictions on individuals and civil society. In addition, once more the question of alleged political motivation in the criminal investigative process has raised its head with a high-profile case involving a prominent lawyer and one-time political ally turned opponent of Prawo i Sprawiedliwość.

The main news stories have included:

· Poland and the U.S. sign a nuclear energy cooperation agreement as the government presses ahead with plans for the country’s first nuclear power station

· Much of Poland is now in a Covid-19 ‘red zone’ as case numbers continue to increase, and

Roman Giertych pictured during his tenure as a Sejm member (“File:Roman Giertych.jpg” by Piotr Waglowski is marked with CC0 1.0).

Last Thursday the Central Anti-Corruption Bureau arrested former Deputy Prime Minister Roman Giertych on money laundering charges, the details of which have not been fully disclosed. Giertych served as Deputy Prime Minister from May 2006 to August 2007 in a coalition government with Prawo i Sprawiedliwość when he was the head of the right-wing League of Polish Families, but the prominent lawyer has been a staunch critic of the current PiS-led government.

The case has led to concerns about the authorities potentially using legal charges to settle political scores. The 49-year-old has represented prominent opposition figures and also the Austrian businessman Gerald Birgfellner in his dispute with Jarosław Kaczyński . He’s currently representing Leszek Czarnecki , a suspect in the so-called GetBack affair.

A statement from the Central Anti-Corruption Bureau said it detained ‘businessman Ryszard K. and former member of parliament Roman G.’ in correction with ‘an investigation into acting to the detriment of a company listed on the Warszawa Stock Exchange’. It added that ‘The evidence collected by the CBA suggests the detained took part in an organised conduct based on siphoning off money, misappropriation of funds, and money laundering. The losses have been estimated at 90 million zlotys’.

Giertych fainted during a search of his home and was taken to hospital rather than being held in custody. He returned home on Tuesday. A court in Poznań rejected applications for five people arrested in the affair, including Giertych, to be held in custody.

A posting on Giertych’s Twitter account on his behalf said that ‘the court challenged the prosecution’s accusations in the Roman Giertych case. We know the rationale.’ Giertych had commented earlier on Twitter ‘Don’t let my detention cover up the epidemic disaster of the PiS government, because that’s the reason behind it’.

Recent political opinion surveys in Poland have shown a sharp drop in support for Prawo i Sprawiedliwość with significant gains for Konfederacja, albeit at a time without, barring accidents, any major elections being pending. Analysts have attributed the trend to concerns over aspects of the government’s handling of and preparedness for, the second wave of Covid-19 as well as the new animal welfare bill affecting PiS support in its rural bastions.

On Monday the United States and Poland represented, virtually, by Energy Secretary Dan Brouillette and Secretary of State for Strategic Energy Infrastructure, Piotr Naimski, signed an agreement on civil nuclear energy cooperation paving the way for the U.S. to take part in the competition to construct Poland’s first nuclear power plant. The agreement was signed during the 5th Summit of the Three Seas Initiative in Tallin, of which the U.S., along with Germany and the European Union, are partners. The U.S. Ambassador to Poland, Georgette Mosbacher, said in a statement that the agreement strengthens relations between the two countries and bolster’s Poland’s energy security. She claimed that the agreement ‘marks several major milestones; not only does it strengthen Polish-American relations, but it’s an announcement to the rest of the world that America is back in the nuclear business, thanks to cutting-edge U.S. technology’. Mosbacher added that the U.S. is ‘ready to help our partners achieve energy security, providing both technology and financing’.

Under the new agreement Poland and the U.S. will jointly prepare a report over the next 18 months which will feed into the final selection by the Polish government of a partner for the nuclear power plant project. U.S. companies will conduct design and preparatory works for the construction of the plant, while work will also take place on financing options.

The Polish Nuclear Power Program provides for the construction of six nuclear reactors with a total capacity of 6-9 gigawatts, with the first one coming online in 2033. In a joint statement by the Polish and U.S. Presidents last June, the U.S. pledged to assist Poland with both civil nuclear energy and 5G technology.

The Three Seas summit itself was only attended in person by three heads of state, Poland’s Andrzej Duda and Bulgaria’s Rumen Radev, along with the host Estonian President Kersti Kaljulaid. Most of the summit of the regional group comprising 12 states bordering the Adriatic, Baltic and Black Seas took place online. The group aims to promote cooperation between its members in order to contribute to economic growth and energy security.

There has been a further tightening of Covid-19 restrictions in Poland amid an ongoing increase in the number of reported cases. Last Thursday it was announced that many more areas of the country, including the capital Warszawa, would become so-called ‘red zones’ meaning the introduction of further measures including the ending of in-person learning at secondary schools and universities and fewer numbers allowed in shops and on public transport from Saturday. Even in ‘yellow zones’ restaurants can only serve takeaways after 9pm, while gyms and swimming pools have been closed. The latter measure especially has drawn protests from the industry.

On Wednesday Poland reported what was then a record number of new Covid-19 cases with 10,040 new cases confirmed, with an additional 130 deaths reported. On Friday Poland confirmed a further 13,632 new Covid-19 cases and 153 deaths. As of today the total number of Covid-19 cases reported in Poland stood at 228,318 with 4,172 deaths being attributed to the virus, albeit with the vast majority of those suffering from serious underlying conditions.

Meanwhile, Jarosław Kaczyński has become the latest high-profile politician to go into quarantine after coming into contact with a confirmed case. He’s reported to be feeling well and working from home. On Monday Przemysław Czarnek was formally appointed as Poland’s Education Minister by President Duda having missed the swearing-in ceremony for the newly reconstructed government due to testing positive for Covid-19.

With All Saint’s Day on November 1st nearing the Health Minister, Adam Niedzielski , has urged Poles not to crowd at cemeteries and to spread their visits over a number of days. All Saint’s Day as well as All Souls’ Day on November 2nd are usually when millions of Poles visit the graves of their loved ones, often travelling long distances to do so.

New economic data shows the Polish economy remains resilient considering the circumstances. Retail sales rose by 2.5% in September at constant prices compared to the same month last year, the Central Statistical Office reported on Wednesday. Fuel sales, probably not surprisingly, were down 4.6%. A day earlier the office had reported that industrial production in Poland was 5.9% higher than in September 2019, which was better than had been expected by analysts. However, the statistics agency had reported on Monday that overall employment in Polish companies was 1.2% lower in September than in the same month last year.

The former national presidential candidate and current Waszawa President, Rafał Trzaskowski, has launched a new political movement, as opposed to a political party as he’s already the deputy leader of Platforma Obywatelska, as well as a trade union. The new movement is called Wspólna Polska or Shared Poland with the title meant to represent what Trzaskowski said was its aim to ‘define the things that we all see the same way’. He said that although Poland is ‘divided like never before’, he ‘believes in a shared Poland’. The new trade union to represent the self-employed and those working on short term contracts is called New Solidarity. Trzaskowski said that Wspólna Polska would be ‘a space for dialogue and cooperation’ between politicians, experts, local government officials, NGOs and the general public’.

The launch of the new movement was delayed from September 5th due to the sewerage treatment plant crisis is Warszawa which led to billions of litres of sewage flowing into the Vistula. Cabinet minister Michał Dworczyk said it was ‘paradoxical that a man who is responsible for an ecological disaster and who for twelve months failed to repair the pipe’ is ‘instructing everyone on how to manage a crisis’.

The Belarusian opposition leader Sviatlana Tsikhanouskaya this week paid her second visit to Poland since the start of the political crisis in the country’s eastern neighbour. She held talks with Prime Minister Mateusz Morawiecki at his office in Warszawa. Afterwards Morawiecki tweeted that the opposition to President Lukashenko ‘is not going to give up, and we will support it in solidarity to the best of our abilities, in this difficult time. Hundreds of opposition activities have fled to Poland in the face of the government crackdown in Belarus with the deputy Interior minister telling the Polish Press Agency that between August 18th and October 18th 707 Belarusians have come to Poland under various immigration and protection categories.