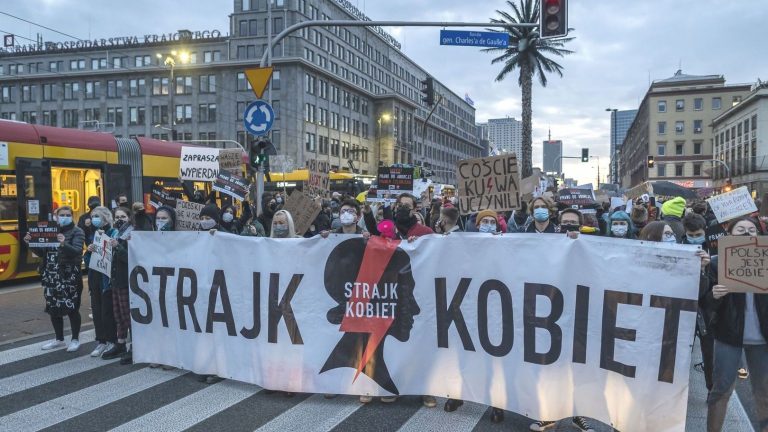 This week has seen a partial easing of the Covid-19 lockdown in Poland with shopping malls and some cultural institutions being allowed to reopen, and indeed many businesses reopening themselves in defiance of the official restrictions. It has also seen the so-called Strajk Kobiet re-ignited following the formal entry into force of more restrictive abortion laws.

· Polska 2050 floats proposals for further separation of church and state, and

As had been expected, there has been some easing of the additional so-called ‘national quarantine’ measures imposed in Poland since the end of December. Since Monday, non-essential shops in shopping malls which had been closed have been allowed to reopen. In addition, museums and art galleries which had been shut since November have reopened. However, despite pressure from businesses, many of whom engaged in a campaign of reopening themselves, restaurants, bars, gyms, and ski slopes haven’t been allowed to re-open – yet at least – with most restrictions being extended until February 14th. It’s been estimated that up to half the gyms in Poland have already reopened themselves. Special shopping hours between 10am and noon reserved for those aged over 60 years of age introduced last October have been abolished since Monday. Possibly in response to business criticism, on Tuesday the government expanded its financial supports for businesses impacted by the restrictions to cover an additional nine sectors including retail, entertainment and education.

Meanwhile the government’s national vaccination campaign, initially primarily targeting the elderly, has been continuing apace. On Monday cabinet minister Michał Dworczyk said that the government isn’t proposing to use the vaccine developed by AstraZeneca and Oxford University for older citizens saying ‘It is obvious that seniors will not be inoculated with this vaccine’. Last Friday it had become the third vaccine to be approved for use by the European Medicines Agency but it had said there isn’t yet enough medical evidence to prove it’s efficacy for those aged over 55 years.

As of Wednesday, the total number of Covid-19 cases in Poland since the outbreak began is put at 1.53m with just under 37,900 deaths at least partially attributed to the virus. The number of new cases and deaths in Poland have stabilised and indeed has been generally on

a downward trajectory for the past several weeks.

The controversy over the further tightening of abortion laws in Poland has re-ignited over the past week with the formal entry into force of the controversial decision by the Constitutional Tribunal last October to remove foetal defects as grounds for legal abortion. Last Wednesday the government’s central information centre Centrum Informacyjne Rządu announced that the Constitutional Tribunal had delivered it’s detailed justification of the October decision, so the verdict would be published in the Journal of Laws, or Dziennik Ustaw, which gives it formal legal effect. It said that ‘The Constitutional Tribunal presented a written justification of the judgement on the protection of life. In line with constitutional requirements, the judgment will be published today in the Journal of Laws’.

Nightly protests under the banner of Strajk Kobiet, in defiance of Covid-19 related restrictions on large public gatherings, began almost immediately with multiple arrests taking place for public order related offences. Three protestors were arrested on Thursday evening when they broke into the grounds of the Constitutional Tribunal building itself in Warszawa.

New statistics have confirmed the impression that the Polish economy is proving more resilient that most to the impact of Covid-19. On Monday Eurostat reported that based on its calculation methodology unemployment in Poland was the second lowest in the EU in December at just 3.3%. Poland’s own Główny Urząd Statystyczny (GUS) or Central Statistical Office put the figure at 6.2% based on its methodology.

Last Friday GUS reported in a preliminary estimate that the Polish economy contracted by just 2.8% last year, which would represent one of the smallest reductions in Europe. According to new Purchasing Managers’ Index figures for January from the UK-based market research company, IHS Markit, business activity in Poland improved to a score of 51.9 points in January. Anything above 50 is viewed as positive. Last April the figure sunk as low as 31.9 following the initial Covid-19 lockdown.

Not all Poles are feeling positive about their economic situation though. Lech Wałęsa told the Super Express tabloid that Covid-19 has bankrupted him. Perhaps somewhat tongue-in-cheek, the former President said that the curtailment of international travel has cost him tens of thousands in speaking fees and that he could even have to go back to his old job as an electrician.

The government meanwhile is planning a series of new public works initiatives, dubbed a ‘Polish New Deal’, to reenergise the economy. According to the government spokesperson, Piotr Müller, it will be launched at the end of the month or early in March. It’s expected to include significant additional public investment especially in infrastructure, health and education. Officials have said it will contain some ‘very big changes’ and have compared it to earlier keynote policies unveiled by Prawo i Sprawiedliwość.

In other domestic political news, Szymon Hołownia’s Polska 2050, which has been rising steadily in support in opinion polls over recent months, has proposed a slew of measures it says are designed to bring about the proper separation of church and state in Poland. Hołownia said on Monday that he wanted to ‘end the corruption of the church by those in power’. Among the measures he wants to see implemented are the ending of the state-financed Church Fund, an audit by the Supreme Audit Office of payments from public funds to bodies linked to PiS-supporting priest Tadeusz Rydzyk, a code of conduct to govern the participation of public officials in religious events, and a reduction in the role of the Catholic Church in religious education in public schools. While riding high in the opinion polls in recent months Polska 2050 has itself faced allegations of internal bullying within its own organisation, according to the Wprost weekly news magazine.

Just when the Polish government and other critics of the project may have thought that the arrest of the Russian opposition leader, Alexei Navalny, would provide further impetus to their campaign against the completion of the Nord Stream 2 natural gas pipeline from Russia to Germany, the change of administration in the U.S. may well have dashed their hopes. An opinion article in last Saturday’s edition of the leading German political weekly, Der Spiegel, under the headline ‘Our most embarrassing foreign policy issue is called Nord Stream 2’ the writer, Mathieu von Rohr, had argued that Germany should abandon the project and face the financial cost rather than press ahead with a project which would ‘jeopardise its prestige’, harm relations with Washington and bring benefit to the Russian regime. However, on Tuesday it was reported that the new Biden administration has conditionally offered to lift sanctions on the project, according to the German newspaper Handelsblatt, which said that the offer had caused the German government to ‘sigh with relief’. The offer is reportedly conditional on Germany coming up with a ‘package of solutions’ to address U.S. security concerns.

On Monday a military coup, once a relatively common occurrence seen in many countries especially in the ‘60s, ‘70s and ‘80s but these days far more rare and generally subject to strong international opprobrium when they do occur – took place in Myanmar, the South East Asian nation formerly known as Burma. Such was the case this time with Poland joining in the widespread international condemnation. A statement from the Ministry of Foreign Affairs said that ‘Poland expresses deep concern about the current political situation in Myanmar. The takeover of power by the army is a violation of the constitution and an attempt to undermine the will of the people of Myanmar, expressed in the general election that took place in November 2020. Poland calls for the observance of the principles of democracy, the release of all who have been unlawfully detained and the restoration of the constitutional order’.

Speaking for the first time since being appointed to the job, Poland’s new national soccer team manager, Paulo Sousa, told a news conference last Thursday that ‘I hope we will be able to build together a squad that is brave, ambitious and knows how to play football…so that the country is proud of its national team’. Commenting earlier on Twitter, where he was pictured with Robert Lewandowski, he wrote that ‘it is a pleasure and a great challenge when the captain of our team is the best player in the world!’. In June Poland will face Slovakia, Spain and Sweden in the group stages of the European Championships postponed from last year.

Above: WOSP founder and leading campaigner Jerzy Owsiak. (Photo: “Wielka Orkiestra Świątecznej Pomocy / The Great Orchestra of Christmas Charity” by Ministry of Foreign Affairs of the Republic of Pol is licensed under CC BY-ND 2.0)

Last Sunday saw the Grand Finale of the Wielka Orkiestra Świątecznej Pomocy (WOŚP) or Great Orchestra of Christmas Charity, an important annual fundraiser both in Poland and among Poles worldwide in support of the purchase of medical equipment for children’s hospitals. Many fundraising events, indeed, took place in Ireland. This year was the 29th year of the event and unfortunately most of the fundraising events were confined to online due to Coronavirus – related restrictions, but nevertheless the organisers reported record fundraising on the day of 127m złotych, 12.5m złotych more than last year. Much more will come in before the final total is announced. Last year the eventual total reached a record 186m złotych (€41m).

However, the event wasn’t free of controversy with it having become associated in recent years to at least an extent with opposition to the current Polish government. That question became more relevant this year when the Strajk Kobiet movement agreed to suspend their protests over the weekend to facilitate WOŚP fundraising and the WOŚP founder and chief organiser, Jerzy Owsiak, thanking them saying ‘We are playing for the women’.

Around 120,000 volunteers collected money for the event in Poland alone. This year’s fundraising was particularly in aid of the purchase of medical equipment used in laryngology and in the treatment of head and neck problems.