Home » The history lesson nobody wants to talk about
Irish News

The history lesson nobody wants to talk about 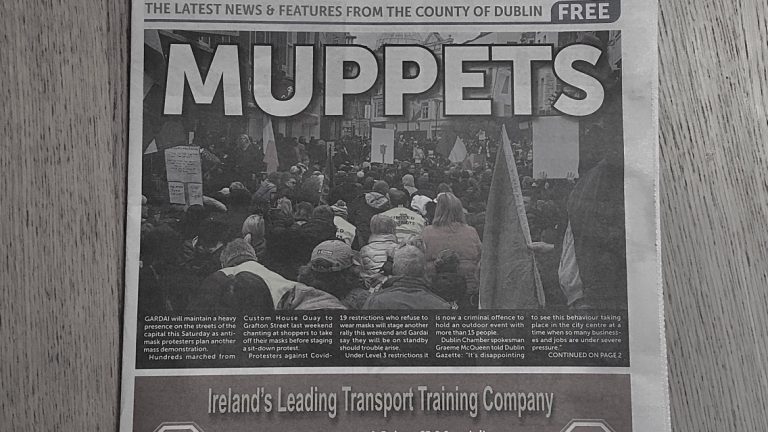 Last week I picked up the latest edition of the Dublin Gazette while leaving my local Dunnes Stores with some shopping. Only at home I noticed with astonishment the frontal page showing the sitting protest organised by the Yellow Vest Ireland on Grafton Street on the 3rd of Oct. What changed my astonishment into a very grim reflection was not the picture but the headline: Muppets.

I read the article which was quite one-sided focusing on the fear of the public that the so-called anti-maskers will spread further the COVID19. At the same time the piece was lacking any inquisitive attitude about the motives of the people who decided to show up in town and voice their concerns despite such a hostile environment these days in Ireland full of censorship and discrediting approach towards any dissenting opinions.

This article was one of the final drops for me to realize that there is growing boldness in the media and clearly expected acceptance in the society for mis-characterising people we do not agree with. What becomes increasingly visible and worrying is the building up of slander and hate speech appearing on a regular basis in mainstream newspapers targeting the lockdown criticizing members of the society. Headlines like “Sociopathic traits linked to not wearing a mask or social distancing during pandemic: study” by Daily Mail, the above mentioned “Muppets” by Dublin Gazette or “Poor numerical literacy linked to greater susceptibility to COVID19 fake news” by the Gardian and finally “Covidiots of all ages are giving two fingers to everyone” and “The far right rises its growth as a political force in Ireland” by the Irish Times, are highly divisive and target any dissent from the official narrative on lockdown policies in the mainstream media. The papers indicate that people who do not trust fear spreading messages propagated by the ever changing their position government who seems to play a blame game with a group of medical experts called NPHET, those skeptical members of the society who do not agree with mandating masks in public spaces with no science supporting such a drastic move, who want the government policies to be more targeted towards cocooning the vulnerable and letting the healthy go back to work, who wish to see a debate between scientists and doctors of different approaches and opinions on treating COVID19 and managing the regular services provided by the HSE, those critically thinking people are labelled as illiterate irresponsible selfish Nazi homophobic sociopaths. If this is not hostility inducing hate speech, I do not know what is.

The same newspapers who praised the participants of BLM protests early this summer and were working very hard to convince the readers that the Irish are racist and full of hidden guilt white supremacists (despite 2 decades of overall welcoming sentiment for continuous immigration) are now guilty of double standards denying anti-lockdown protesters the right to show their concern about the increasing restrictions and lack of genuine consideration for the small and medium businesses being gradually decimated by the policies of the detached from the real life technocrats in power.

Moreover, this consistent targeting of lockdown skeptics inevitably brings back a bad taste of clearly long forgotten traumatic events from over 80 ago. In the 1930’s there was another group of citizens in another country who was persistently aimed at by that state propaganda in newspapers. That state agenda was to imprint in the minds of the readers a very ugly picture of that minority which invited the public to ignore the regime and its increasing violence and discriminating laws towards that small section of the society. Do you know who I am talking about? Which minority, what country? And what is most important: do you remember how it ended?