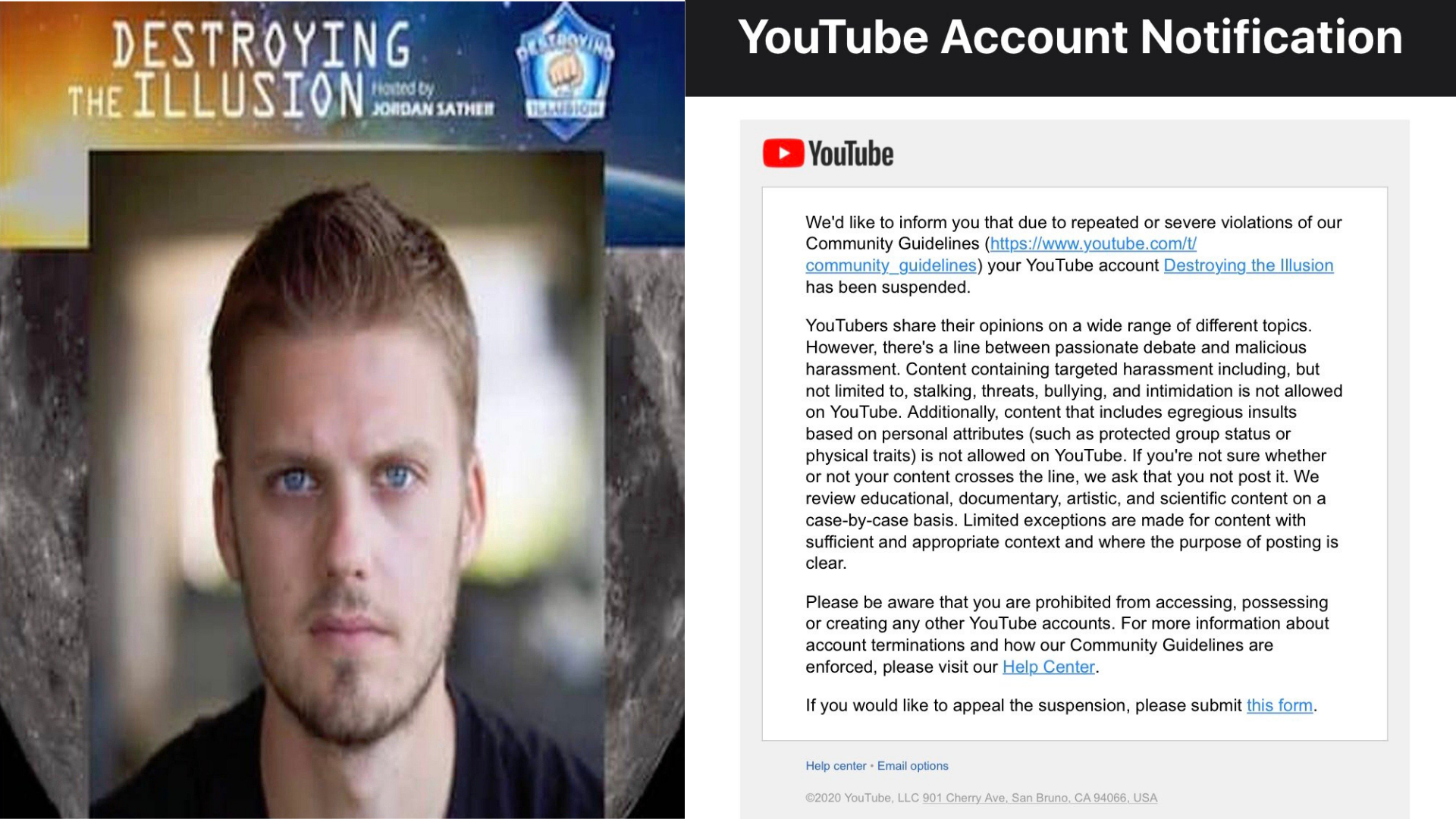 YouTube decided to pull the plug on the whole #GreatAwakening2020 movement…

Yesterday the platform deleted the accounts of the #Patriot influencers from the other side of the pond, among others, #EdgeOfWonder, #JordanSather‘s #DestroyingTheIllusion (this one went down for the 3rd or 4th time already; it happened about a week ago, before everyone else), #JoeM, #X22report, #IPOT1776, #RedPill78, #SpaceShot76, #AndWeKnow, #JustInformedTalk and many many others, most likely around the whole world.

This came way after YT moderators deprived thousands of content creators of their income by blocking, censoring and shadowbanning* any content that didn’t agree with the mainstream narrative. The final steps of this online homicide were the economic devastation achieved by cutting off the monetization option and eventually, deleting an account. The lack of clear guidelines for what is accepted and what is an obvious no-no on the platform didn’t make it easier. Far from it, it seems like many (though not all) popular channels oscillated around the content full of violence and all sorts of pornography 😱 It’s almost as if the social media were quietly trying to condition us to be anti-social. On a platform – and in a world – where counter-intuitive (and ethically questionable) choices are the ones constantly hitting the jackpot, many reasonable and decent people with integrity will have a hell of a time creating a positive, lasting impact on their peers.

This, however, is just one of many possible points of view. Instead of cancelling culture, let’s cancel defetism. After all, every failure is potentially a new challenge and a great opportunity to better oneself.

“Despite the constant negative press COVFEFE”, as POTUS himself put it on Twitter some time ago. It fits perfectly in this context.

This is where the Edge Of Wonder crew steps in. Ben Chasteen and Rob Counts had put an independent TV platform months in advance, in anticipation of this cancerous New World Order strategy. Anyone affected by the blatant YouTube #censorship can get in touch with the EOW team at and broadcast their content on the “edgy” TV.

The platform is accessible via the ordinary Internet (which is hopefully staying with us for good, with the possible exception of a short blackout 😉 for a monthly subscription at a price of 2 cups of coffee, that is $9.99.

EDGE OF WONDER TV covers a broad selection of highly controversial topics in concise episodes, which would never make it to the wider audience, were their creators to depend on the mainstream social media platforms, like YouTube, Facebook, Instagram or Twitter. EOW TV original creators, Ben and Rob, present topics ranging from:

– the inception of Communism (which has more to do with dubious figures like spellcaster, Aleister Crowley and the arcane neutrino portals “playing” with Dark Matter, i.e. other dimensions; mostly the lower ones, I’m afraid)

– human trafficking since the beginning of time until now, currently being at its worst, according to the POTUS himself (dark side of the Internet)

– UFO, Bigfoot, ancient civilizations, Bible analysis, exopolitics** and whatnot – and this is a compliment 😀

– weekly updates on the latest events during Friday live streams

– and finally, an unavoidable but modest variety of modern day, ‘new agey’ spiritual offers, which you may politely ignore, like I do; but you will still find plenty of stuff over there more than worthy of your bucks and you are free as a young horse to hop between different “channels”, or contributors, and graze on the green grass of their inspiration.

If you missed it, let me point it to you: we are at war and we are the Digital Soldiers. This isn’t just about creating another tv station. This is about regaining our voice as free members of an unsuppressed, healthy human development conducive society. Of course, there are plenty of other options, too, like Rumble, Bitchute, Gab, Parler etc. Anything, as long as it defies censorship and respects our human rights: Life, Liberty and the pursuit of Happiness.

The recent examples of the SM giants’ appalling censorship did not spare even the President of the United States, Donald J. Trump, his family members and the White House staff! A number of presidential tweets removed from Twitter and the recent “locking out” of the White House Press Secretary, Kayleigh McEnany’s private account are just a few of many distasteful demonstrations of the uncontrollable impulses for the supremacy-hungry media handlers.

I, myself, have experienced the destructive outflow of Facebook’s infringement on my rights – having my fan page almost completely deprived of any significant reach by shadowbanning my posts, and my following suppressed. The same happened with my posts on our HelloIrlandia Facebook fan page. And I have a proof! (which is not easy to get; looks, like I got lucky 🍀 with those two) – the original, unaltered screenshots taken one after another, and showing a diminishing, instead of growing numbers describing my post’s outreach and likes received, from one minute to the next… This is NOT how it works in this Universe.

Unfortunate actions, like the latest YouTube stunt are, in fact, a bigger blow to a platform itself, than to its banished inhabitants. Parasitic entities, like the mainstream media and the social media monopolists (and the ruling ‘elites’, likewise) don’t understand, that killing off the host equals the parasite’s ultimate demise.

Well, I guess we need to let them learn it the hard way.

* Shadow banning, also called stealth banning, ghost banning or comment ghosting, is the act of blocking or partially blocking a user or their content from an online community so that it will not be readily apparent to the user that they have been banned.